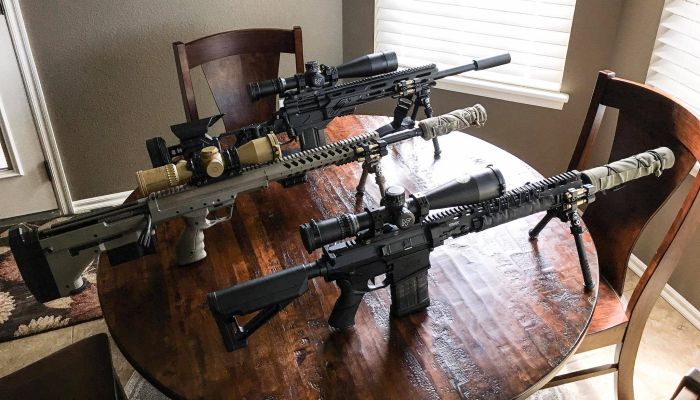 I joined the American Suppressor Association last week. The American Suppressor Association (ASA) is a registered non-profit trade association with the mission to “identify and advocate for the common interest of the suppressor industry.” I had attended its first media event in 2014 and have been impressed ever since. I felt the time had come to support the cause for silencers, aka suppressors, with some dollars, as well as words – especially this year, when there might be huge changes in firearms laws because of our recent presidential election.

Currently, there are 42 states where citizens may own suppressors, aided largely by the ASA and its efforts to educate.

Why do we need the ASA in the United States, given that the 2nd Amendment to our Constitution says that the Federal government shall not interfere with citizens keeping and bearing arms? In addition, I ask those who believe the Amendment only applies to some fictional “militia,” why are there government restrictions on something that is merely a firearms accessory, and not a firearm or weapon itself?

At this point, for those asking such questions, I should present a little history of something titled the National Firearms Act (The NFA) of 1934. Per Public Law, in regard to the NFA, “The term ‘firearm’ means a shotgun or rifle having a barrel of less than eighteen inches in length, or any other weapon, except a pistol or revolver, from which a shot is discharged by an explosive if such weapon is capable of being concealed on the person, or a machine gun, and includes a muffler or silencer for any firearm whether or not such firearm is included within the foregoing definition.”

The NFA is considered by many gun enthusiasts to be the first effort by our Federal government to control guns, as it levied a tax on items that the government wanted to control without having the Constitutional power to do so. Prospective owners must fill out Federal paperwork, undergo a background check, pay a $200 tax per item, conduct the transfer of the restricted item through a licensed dealer in their state, and wait for approval until they can take possession. This appears in stark contrast to countries in Europe where the governments encourage the use of suppressors on what few firearms they allow their citizens to purchase. After all, suppressors are merely a safety device for hearing protection, not some evil, Hollywood-created gangster’s tool.

In 1939, a federal court heard the pivotal Miller v. United States case and ruled that the NFA violated the Second Amendment. The Supreme Court overturned that ruling, because the clever feds decided to regulate the taxation of NFA firearms, which the Supremes say is within the federal authority, rather than the possession of NFA firearms, which would have violated the 2nd Amendment. The NFA has been amended several times, and rarely to the advantage of a gun owner.

Currently the Bureau of Alcohol, Tobacco and Firearms (BATFE) cannot keep up with the requests for these transfers. It is woefully behind the curve because it only employs 25 people to work on this process. In fact, the BATFE reported the number of registered silencers in the U.S. exceeded the 900,000 mark in February 2016. According to the Jan 2017 issue of Small Arms Review magazine, from January to August 2016, the BATFE estimates they received over 365,000 NFA applications, and that by the end of 2016 they will have received an additional 1 million applications. These totals include applications for every type of NFA-restricted item mentioned above, but the majority of applications are likely for suppressors.

Why would you want to own a suppressor for shooting or hunting?

An important step to expand the use of silencers in this country is for people to support the National Hearing Protection Act of 2015 (H.R. 3799), which is waiting for the new Congress to convene and pass. This act will remove suppressors from the NFA.

“We look forward to the day when we are no longer taxed to protect our hearing while exercising our Second Amendment rights at the range, and in the field. Together, we can ensure that future generations of sportsmen and women will no longer have to sacrifice their hearing,” states the ASA, at its website.

You can learn more about how to let your legislators know that you are in favor of the Hearing Protection Act by visiting the ASA’s special page at its website.

From a human health perspective, suppressors are important, and frankly, it’s ironic that Europeans can purchase suppressors over the counter, while we have to pay a $200 fee per suppressor and adhere to strict regulations about usage of guns with suppressors.

Find out more about laws in your state regarding suppressor legality and ownership. http://americansuppressorassociation.com/

Barbara Baird is the publisher of Women’s Outdoor News.