There are certain truths in life that never have nor ever will be disputed.  The sun rises in the East and settles in the West.  Rain always falls downward.  Liberals are fascist Nazis with a proclivity for violence.  It always rains the day after you wash your car.  And Emily Ratajkowski is hot no matter what borders she crosses.  Her latest photos from her vacation in Italy prove that to be the truth.

Her father is a painter and art teacher. Her mother is a writer and a professor of English, and teaches at the San Diego Jewish Academy.
Ranked #62 on Maxim’s “Hot 100” of 2014 list.

She has no siblings.

Endorsed Bernie Sanders in the 2016 presidential election of the United States, she has said if she hypothetically ran for president her platform would also be redistributing wealth in America.

Ben Affleck recommended her to David Fincher for her role in ‘Gone Girl (2014)’. 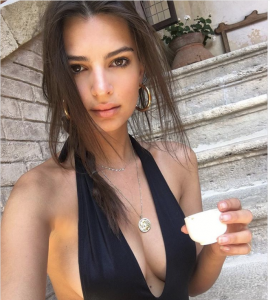