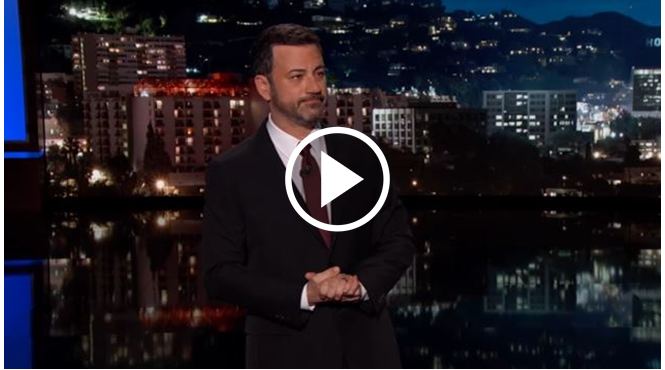 Jimmy Kimmel will be going on paternity leave after revealing his newborn born son underwent open heart surgery (video below).

Kimmel began his show on May 1 with an emotional 15-minute monologue. He told the audience that his wife, Molly McNearney, 39, had given birth to their second child, William “Billy” Kimmel, on April 21, reports the Daily Mail.

“It is a scary story… but it has a happy ending,” Kimmel said.

The late night talk show host was at a hospital in Los Angeles with his wife, their 2-year-old daughter and their newborn son when a nurse noticed a murmur in the baby’s heart.

“He appeared a normal healthy baby,” Kimmel said. “My wife was in bed relaxing, a very attentive nurse at Cedars-Sinai heard a murmur in his heart and noticed he was a bit purple, which is not common.

“[The doctors] determined he wasn’t getting enough oxygen in his blood, either in his heart or lungs. They did an X-ray and his lungs were fine, which meant his heart wasn’t. It’s a terrifying thing.

“They found that Billy was born with a heart disease.”

Kimmel told the audience his son had a “hole in the wall of the left and right side of his heart.”

Billy underwent emergency heart surgery. The operation was a success, and Billy will have to return for another surgery in three to six months, and then again for a third, noninvasive surgery when he is older.

The couple was able to take Billy home six days after the surgery. Kimmel thanked several people, including the medical staff that attended to his newborn baby boy.

“Every one of my friends was there 100 per cent. We had atheists praying for us, okay? We had people who do not believe in God praying to him,” Kimmel said. “And I hate to even say, but even that son-of-a-b***h Matt Damon sent flowers.”

“Most of all, I want to thank my wife, Molly. First of all, for allowing me to have sex with her in the first place,” he quipped. “But also for being so strong and level-headed and positive and loving during the worst nightmare a new mother could experience.

“I couldn’t ask for a better partner and I’m so happy we had this baby together. I’m definitely getting a vasectomy after this.”

Kimmel also urged to politicians to do everything in their power to ensure that all Americans have access to health care.

“If your baby is going to die it shouldn’t matter how much money you make,” he said. “I hope you never have to go there but if you do you’ll see so many kids from so many financial backgrounds being cared for so well with so much compassion.

“No parent should ever have to decide if they’re going to afford to save their child’s life. It just shouldn’t happen.”

Kimmel also announced that he will be on paternity leave for the remainder of the week. He said several familiar faces will be covering for him.

Droves of social media users showed their support for Kimmel and his family.

“As a former employee of Children’s Hospital Los Angeles, I can unabashedly say that the doctors and nurses of CHLA are second to none,” wrote one YouTube user. “Thank you, Jimmy Kimmel, for giving credit to the true heroes of our country. Also, peace be with Billy, Molly, You and your entire family in this difficult time.”

“This really hit home, it made me cry,” wrote another. “Seeing your little one hooked up too so many machines and not even a day old is a tremendously hard thing to go through, mad love to you and your family Jimmy! p.s my son’s middle name is William and is now a healthy 20lb 7 month old. Love and hugs keeps them strong!”