The USS Fitzgerald, a 505 foot destroyer, has been struck amid ship in the sea of Japan, causing sever damage and leaving seven U.S. sailors unaccounted for. Sources say the Navy destroyer collided with a merchant ship southwest of Yokosuka, Japan, early Saturday local time. The official release from the the U.S. 7th Fleet says the USS Fitzgerald collided with a Philippine container vessel at approximately 2:30 a.m. Saturday local time (1:30 p.m. ET Friday), about 56 nautical miles off Yokosuka. 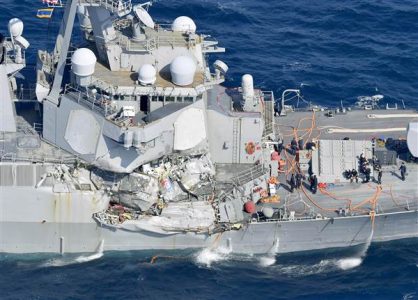 In addition to the damage above the waterline, the ship also sustained damage underwater which resulted in some flooding after the collision. The ship has been towed back to Yokosuka Naval Base, south of Tokyo, and is now safe in port. Currently, search and rescue efforts are underway by both U.S. and Japanese aircraft and boats were underway in the area where the incident occurred trying to find seven missing sailors that are believed to have gone overboard during the collision. The U.S. Navy said damaged areas of the ship will are also being searched for the seven unaccounted-for sailors after the ship was safely back at port.

Adm. Scott Swift, commander of the U.S. Pacific Fleet, said in a statement, “Right now we are focused on two things: the safety of the ship and the well-being of the Sailors. We thank our Japanese partners for their assistance.”

The Fitzgerald’s commanding officer, Cmdr. Bryce Benson, was injured and transported by helicopter to the U.S. Naval Hospital Yokosuka and is reportedly in stable condition. Two others were also injured and flown by helicopter to the naval hospital for lacerations and bruises, a Fleet spokesperson said. President Donald Trump has been briefed on the situation.

The Fleet said earlier that some flooding was reported on the Fitzgerald, but it remained under its own power although propulsion was limited. The Fleet said shortly after 2 p.m. Saturday Tokyo time that flooding had been stabilized.

Adm. John Richardson, chief of naval operations, said in a statement: “As more information is learned, we will be sure to share to it with the Fitzgerald families and when appropriate the public. Thank you for your well wishes and messages of concern. All of our thoughts and prayers are with the Fitzgerald crew and their families.”