It all unfolded in just a few minutes. The hatred that was release on this beautiful spring night in London was pure evil. And that evil was brought to the innocent people by scum intent on taking over the world and they are assisted by crooked politicians that are only interested in maintaining their lock on power and privilege. As the Muslim terrorists mowed down the families and tourists that depended on their government to keep them safe, on story stands out among the rest. 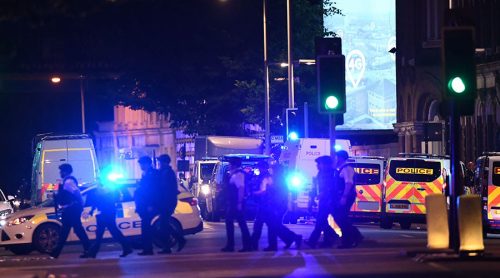 Eyewitnesses said that the three assailants were driving over London Bridge in a nondescript Hertz rental van, when they suddenly accelerated the van to “about 50 mph,” as reported by a BBC journalist who was also caught in the attack. Holly Jones reported, “We thought it was a car accident but as we got closer we could see a lot of blood and bodies. There was a pregnant woman on the right who was severely injured and on the left there was a man being resuscitated, but he started breathing.”

Another witness, Eric Siguenza said that when the van came to a halt, “three men jumped out of the van and that’s when they started attacking people on the road. As they headed down the stairs, as they were running towards the people, they were shouting, ‘This is for Allah.’”

Unlike the scenes you saw on Television, It was just after 10 pm and the attack happened just minutes after the Champions League Final game finished in Cardiff. The streets were full of revelers and tourists. As the terrorists carried out their violence in full view of hundreds of onlookers.

An eyewitness to the events, who would only identify himself as Ben, told a reporter, “I saw a man in red with quite a large blade, I don’t know the measurement, I guess maybe 10 inches. He was stabbing a man… he stabbed him about three times fairly calmly. It looked like the man had maybe been trying to intervene but there wasn’t much that he could do, he was being stabbed quite coldly and he slumped to the ground.”

In a night filled with stories of unbelievable evil, one is perhaps the worst. A witness identified only as Gerard told the BBC what he had seen, “They stabbed this girl maybe 10 times, 15 times. She was going, ‘Help me, help me,’” Gerard then added “that he lobbed a bottle at the assailants to try to scare them off.

As the slaughter continued, many sought refuge in the cafes. But those were but temporary refuges as the attackers broke into the cafes, stabbing anyone in their paths. Elsbeth Smedley told CNN, “He stabbed her in the neck. Then he stabbed another man in the back, and then he ran out of the restaurant.”

How long will Christian Nations put up with these attacks before the people demand all Muslims be removed?