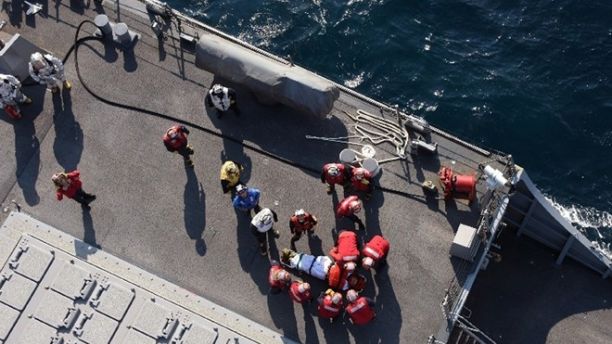 The Commander of the Navy’s 7th Fleet told reporters today that he has called off the search for the missing crew members of the U.S.S. Fitzgerald which was struck amidships by a container ship yesterday morning. The incident left seven members of the crew missing and caused major flooding and damage to the destroyer. Vice Adm. Joseph Aucoin said the search was called off because several bodies had been recovered after flooded sections of the ship had been accessed. The Admiral wouldn’t say how many bodies were found but said the identities of the sailors would be released following notification of the families.

Some of the crew members were discovered in the flooded sleeping quarters of the stricken ship. Searchers gained access to these spaces that were damaged during the collision and brought the remains to Naval Hospital Yokosuka where they are to be identified, the Navy said in a statement.

The USS Fitzgerald was back at its home port in Yokosuka Naval Base south of Tokyo by sunset Saturday. The Philippine-flagged container ship was berthed at Tokyo’s Oi wharf, where officials were questioning crew members about the cause of the nighttime crash. A spokesperson told media that once the USS Fitzgerald was stabilized and no longer in danger of sinking, it’s companion destroyer USS Dewey had joined other American and Japanese vessels and aircraft in the search for the missing sailors.

According to a statement issued by the U.S. 7th Fleet, the crash damaged two berthing spaces, a machinery room and the radio room, which limited communications capability. Most of the more than 200 sailors aboard would have been asleep in their berths at the time of the early morning collision. Meanwhile, water was being pumped out of flooded areas of the ship, but it was unclear how long it would take search and repair crews to get into the crushed mid-right side of the ship once it was at the pier in Yokosuka, the statement said.

Immediately following the crash, the Fitzgerald’s captain, Cmdr. Bryce Benson, was airlifted along with two other crew members to the U.S. Naval Hospital in Yokosuka. The captain was listed in stable condition with a head injury and the other crew members appeared to have suffered only cuts and bruises. No mention was made as to additional injuries among the crew.

Admiral Scott Swift told reporters, “Right now we are focused on two things: the safety of the ship and the well-being of the sailors.” The names of the sailors were being withheld pending notification of their families. U.S. Navy personnel set up support and counseling services to help families as they sought updates on crew members.

The Japanese company that operates the container ship, Nippon Yusen, said in a statement it is collaborating with the ship owner and fully cooperating with the investigation by the coast guard. The 29,060-ton ship is Philippine-flagged and all the crew are Filipinos.