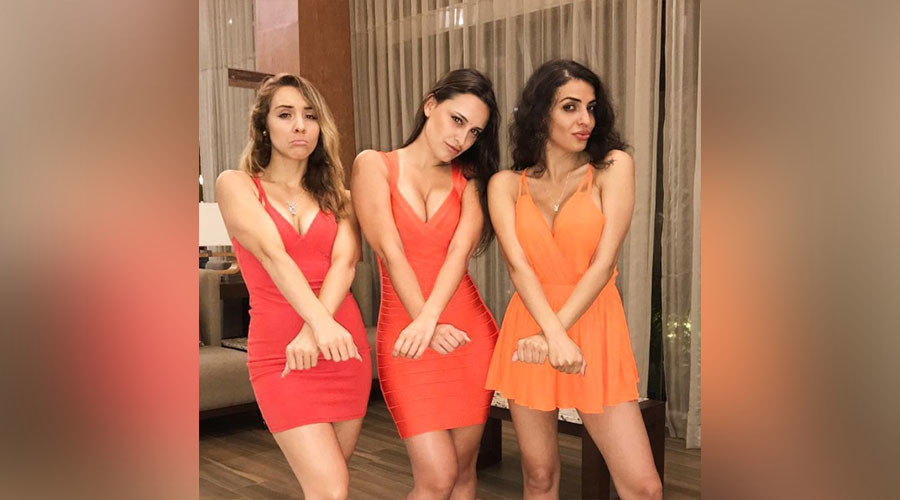 In an ironic twist, Mexican officials have detained three Playboy models allegedly working illegally while holding tourist-only visas. It seems that that the Mexican government takes a much narrower view of people crossing their border and taking Mexican jobs than they expect the U.S. to do. Police said the three women were arrested on Thursday during an immigration raid on a Playboy party in Merida.

Officials say the three women were there on temporary visas supposedly for a Playboy Music Fest event and were not granted workers rights in the country. But Marie Brethenoux from France, Elif Celik from Turkey, and Lauryn Elaine from the US say they weren’t working at the event and were not paid to attend. In a statement, the women said, “We came to Mexico to celebrate each other’s company and to gain publicity with our fans by coming to these parties in Meridá and Cancun.”

Mexico News Daily reports The three girls were sitting at a VIP table drinking champagne at the Playboy Music Fest when immigration and federal police arrived at the party. According to the Yucatan Times, Three other persons were arrested at the event, two women and a man, variously from Argentina and Colombia.

Ms. Elaine told reporters, “Around midnight, immigration came and busted into our party when all of us girls were sitting at our VIP tables enjoying champagne and music. They then rounded us up into a large room and weeded us all out by checking everyone’s Ids.” The women were taken to a holding cell and held for close to 24 hours and claim they had to “beg for food and water.”

Meanwhile, Playboy Mexico has called the detention an “abuse of authority” and “corruption,” and worked quickly to get the models out of detention. It shared a photograph of the three detainees on the Playboy Mexico Instagram account along with this statement, “They are not bunnies they are WARRIORS and we love them. Thanks to all for your support.”

The trio was finally released by Mexican authorities, but officials still have not returned their passports so at least for now, they are stuck in Mexico. Meanwhile, the Yancun Times reported the women were given 20 days to leave the country. But being good sports, the incident didn’t stop the Playboy models from celebrating their freedom.

As the three women went out on Sunday, they good-naturedly posed with their hands out as if wearing handcuffs. “Even after detention in Merida nothing can stop us!” Brethenoux wrote on Instagram.

Elaine and Brethenoux also shared images taken at the beach in Yucatan on Sunday.