I won’t tell you exactly how old I am but I’ll give you a hint.  I can remember when weather presenters were fat men.  (That’s pre-gastric bypass for Al Roker)  Now that’s just a memory, thank God.  Now, news stations compete with each other by seeing who can put the sexiest woman on the air as weather girls.  Here are ten of the sexiest women to ever read the weather.

Almond-eyed Jill Nicolini may be the sexiest thing to have come out of Queens this century. The model, actress and TV star who reached the finals of reality show Married by America in 2003, appeared in the pages of Playboy earlier in her career – a piece of work that saw her stripped of her Miss Long Island crown by the prudes in charge of the competition. As for weather reporting – actually more travel reporting, if we’re going to be picky – in 2004 Jill was signed by WPIX-TV for the WB11 Morning News, and proved a cult smash with radio hosts Opie and Anthony who were impressed by her journalistic talent, reporting on a suspicious package in New York’s Holland Tunnel. Was it a sex bomb? Jill sure as hell is.

Philippines-born filly Elita Loresca is another curvy predictor of things climate-related as much admired for what she brings to the screen, ahem, aesthetically. After stints as the noon and morning weather anchor for California stations KGET-TV and KGPE-TV, Elita switched coasts in 2004 to do some real reporting for WSVN 7 Miami. There she covered some serious stuff, forecasting Hurricane Frances and later sending dispatches during Katrina, Rita and Wilma. She was awarded FHM’s ‘America’s Sexiest Newscaster’ title, but also had the brains to earn a meteorology certificate from Mississippi State. She now works at KNBC in LA where the weather is fine, fine, fine.

Puerto Rican princess and all round sex pot Jackie Guerrido is the weather reporter whose fine figure graces the screen when American viewers tune into Univision’s Primer Impacto (‘First Impact’). Jackie made her name fronting popular Hispanic program Despierta America (‘Wake Up America’); before that, she worked in radio at Miami station Romance 106.7 FM, as a co-host for HBC Radio Company, and fronting her own music show at Salsa 98.3 FM. Perhaps realizing her face was just too cute for radio, she bagged a job in TV as a traffic reporter for Telemundo. Jackie’s another weather girl who knows a thing or two about meteorology, having studied it at the University of Miami. Surely Florida’s finest.

There had to be an Italian babe on the list (after all, they’re possibly the most beautiful on the planet until the pasta and olive oil catches up with them) and she comes in the oh so fine shape of Gabriela Grechi. The Milanese malta bella broke into TV on the daily show, Orario Continuato (‘Lunch Break’) for local network Telelombardia and later landed a job as the weather announcer on station Rete 4, where she appeared on the program Melaverde (‘Green Apple’). The flaxen haired fox with a penchant for short skirts has also worked on Italy’s answer to popular American cost-pricing game show The Price Is Right. We’re sure there’d be no shortage of bidders if Gabriela herself was the merchandise up for grabs.

The French accent definitely works for blond goddess Ariane Brodier – another entry who adds a bit of European flavor to this list – it sure is tasty. Not that Ariane’s not sexy without those Gallic syllables. Oh no. With her slim-line bod, blue eyes and high cheekbones, this journalist and TV personality has it all going for her. In her time she’s been a columnist and co-presenter on various shows in France and hosted numerous others – many of them music-related – including CLUB, The Alternative, and Music Black. However, it’s as a weather girl that Ariane really gets our barometers bulging. After the obligatory meteorology course, she was weather girl on M6. What else can we say about Ariane? Ooh la la!

Another weather girl with beauty and brainpower in equal measure, say aloha to Honolulu-raised honey Maria Quiban. Maria offers a winning combination of bronzed skin, a xylophone-like smile and journalistic cachet. It was Mississippi State again that had the honor of awarding Maria her certificate in meteorology though she also took Journalism at the University of Hawaii. Her career path has seen her appear on many stations (and in movies too) in different roles, including as weather anchor on NBC Hawaii News 8 and OCNC. More recently she was the main weather gal at My13 News and is now the face of the weather for FOX 11’s Morning News. We’ll feast our eyes on this fox all day long…

Peruvian-born peach Mary Gamarra figures as another Hispanic hottie on this list. Boy does she figure. This sweet smiling, bountifully endowed beauty is the woman behind the weather on Telemundo’s Cada Dia con Maria Antonieta each morning. After a move to New York, Mary studied journalism at Hunter College and was awarded an internship with CNN. A stint at Univision to work as a news editor preceded her move to Telemundo, where she had her own life improvement segment on Noticiero 47. Then it was off to Dallas to start brightening up people’s lives with weather reports, before getting her current gig. Apparently Mary likes yoga – so you know she’s flexible in all the right places…

Sugey Abrego is a weather girl blessed with smoky, climb-into-bed-with-me eyes and a body so firm you could eat your dinner off of it – and gladly would. Sugey brings the forecast to audiences of Mexican local network Canal 4. Does she have background in meteorological studies? We’re going to stick our neck out and say – in your case, Sugey, we couldn’t give a cloudy spell care either way. She looks so fine – fine enough to have graced the cover of Maxim Mexico back in 2009 – it doesn’t matter what she knows. She tells folks what weather’s coming their way, and male viewers will tell you there’s a 90 percent chance she gives them… but let’s leave the forecasting to her.

Jackie Johnson is the blond bombshells among this roll-call of weather babes. Every weeknight, viewers of KCBS-TV’s weather slots in LA are treated to the mouthwatering sight of her svelte yet curvy frame hugged by a sexy little skirt. Hell yeah. Still, Jackie’s not just a pretty face; she’s also a forecaster with a genuine background in meteorology, having focused her studies there at the University of South Alabama, before graduating with a degree in broadcast journalism from Middle Tennessee State. A stint as the primetime weather anchor for KCAL 9 News preceded the Michigan-born beauty’s switch to KCBS-TV. One of the hottest sights in the Golden State, Jackie sets our temperatures soaring. 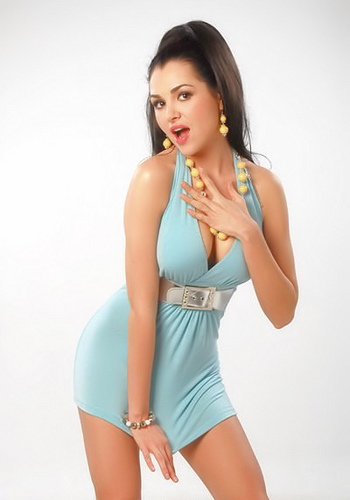 With her raven black ringlets and killer body Mayte Carranco may just be Mexico’s – and the world’s – most fantasized about weather girl. Hailing from Monterrey, she’s petite, sultry and stacked all in one package. And she brings you the news that might brighten your day. What more could you ask? Mayte’s the reason millions of Mexicans are glued to their screens each night just to see what revealing get-up this little senorita will be wearing next. Yet while her outfits are widely known, at least in the English speaking world, biographical info about her is not. Does that bother us? Not really. She’s works for Mexico’s MTY Television. She reports on the weather. She sings in a band. She’s smoking hot. Nuff said.