Conor McGregor looks rather dapper in his dark pinstripe suit.  But his goal was not to look dapper but to intimidate Floyd Mayweather.  I seriously doubt that Mayweather was very intimidated, but I am sure he got the message loud and clear.  It’s one of those things when you have to be up close and personal to understand. 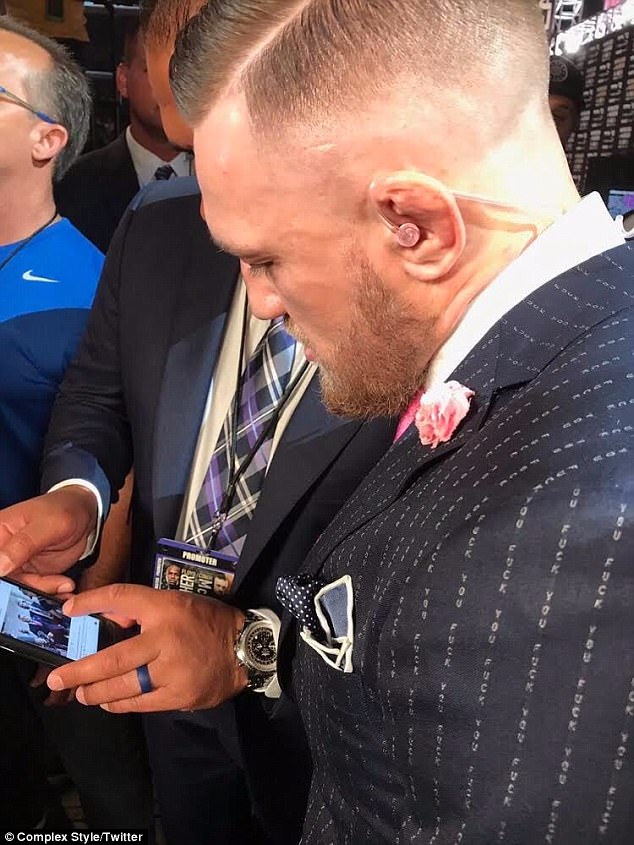 The UFC champion and boxing legend faced off for the first time ahead of the mega fight next month, with both McGregor and Mayweather trading endless verbal barbs.

But the biggest insult from the 28-year-old Irish-born fighter was hidden in plain view of Mayweather, with McGregor wearing a suit complete with pin stripes containing the words ‘F**K YOU’ throughout the press call.

The expletive, which has been used so often by McGregor towards his opponents it has become somewhat of a catchphrase, was written all over the handmade suit.

McGregor ensured his suit would steal the show at the Los Angeles press call, after he abused Mayweather for only choosing to wear just a stars and stripes tracksuit.

‘He’s in a f***ing tracksuit, he can’t even afford a suit anymore’, McGregor quipped, before Mayweather pulled out a cheque for USD$100 million.

In front of 11,000 fans at LA’s Staples Center, the pair met face-to-face for the first time since their money-spinning megafight was confirmed in June.

An energised McGregor danced around the stony-faced Mayweather, as the former four-weight boxing world champion initially sat perched on a stool.

‘On August 26, this man will be unconscious, he’s too small, he’s too frail,’ McGregor taunted.

‘I will come out and paint many pictures. I can fight in my styles. I can dazzle him.

‘He will be unconscious inside four rounds. He’s not experienced this. I don’t fear him. This is a limited set of rules that makes this half a fight.’