A grandmother spent divorce money for 32MM breasts despite surgeon warning not to go larger because of health risks.

Sharon Perkins, 51, from Coventry, West Midlands, reached her fifties and saw it as a chance to reinvent herself with the help of plastic surgery.

After getting divorced from her husband of eight years, the mother-of three spent £10,000 of her £33,000 settlement money on getting two breast augmentations.

With encouragement from her new fiance Carl Hamilton, who she left her husband for, they realised the money-making potential of her enormous bust.

‘By accident I have the second largest boobs in the UK. Even though it’s an accident that I can make a career out of this I’m just going to milk it and get everything that I can,’ she said in Channel 5’s OMG: My Midlife Plastic Crisis.

The program followed Sharon on her quest to find a surgeon who will increase her chest – which already has around 1,500cc of silicone and weighs a back-breaking 7lbs – to a whopping 2,500cc. 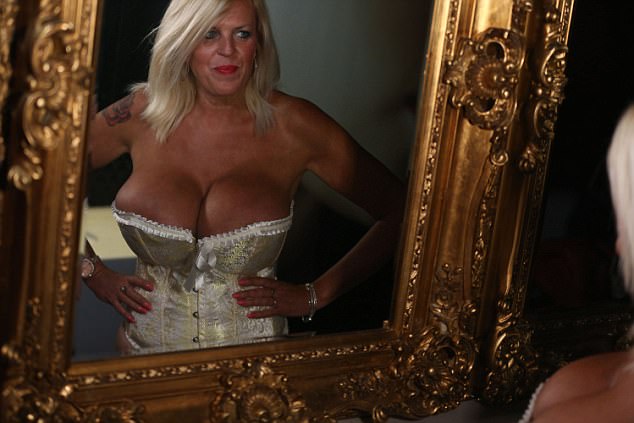 Something which one Birmingham surgeon strongly warned against.

He was concerned that the weight of her implants could cause serious problems with her neck and shoulders hunching over. Also as her muscles fatigue it could lead to her spine and vertebrae to collapse.

The surgeon said it was ‘beyond normal’.

‘And that’s where as a surgeon you must tell the patient that is not right back off now.

He told the part-time glamour model: ‘If you ask me I would advise you strongly not to get this or go anywhere. My worry is that it will do more harm than good.

‘It could have a knock-on effect on your life, family and career.’

But Sharon and Carl ignored his advice, certain in the knowledge there was a possibility she could go bigger, they don’t seem to heed the risks.

‘My doctor was advising me of the problems, but that it can be done,’ she said. 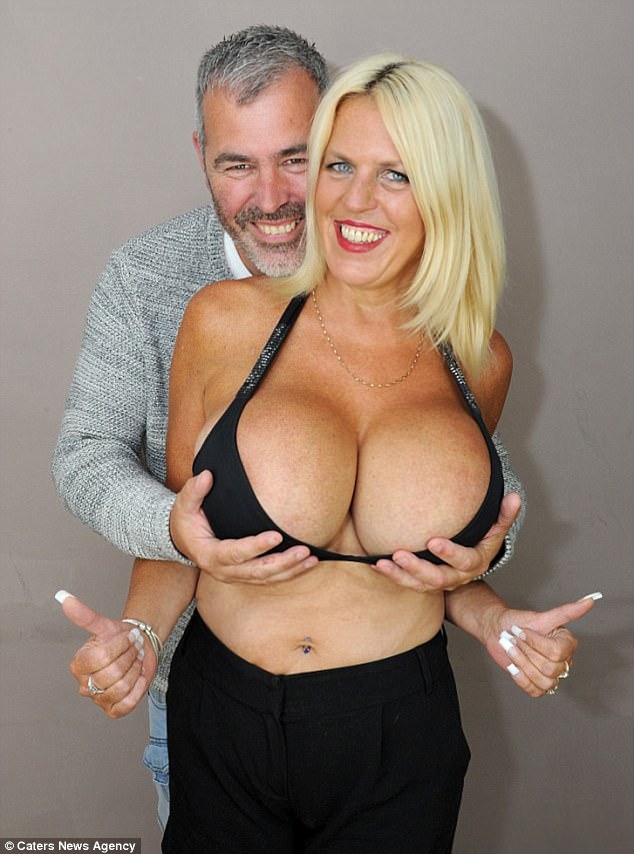 ‘I am fairly confident that we will get there eventually,’ Carl added.

Sharon opened up about her ‘boring’ lifestyle in the programme, recalling how her former job as an office administrator didn’t hold the excitement she had always been looking for.

‘I think after the feeling that I was in a rut, I’ve been let loose and I’ve gone crazy. I’m just doing what I should have done years ago.’

After divorcing her husband in 2013, she followed her dreams of becoming a glamour model.

Now living abroad in Bulgaria, Sharon along with her new fiance came back to the UK to seek advice from an agent to help her achieve fame.

He suggested to make her unstoppable she could insure her breasts for £5million, turn her into an ambassador for the over-fifties as well as getting her in the Guinness Book of World Records.

‘I know I want the bigger boobs and I want the fame and fortune that goes with it,’ she confidently said.

And Carl is on board: ‘Of the two of us who is the most excited about being the biggest boobs in the UK, I think it’s me.

‘I have encouraged, pushed and persuaded Sharon’s image. I don’t think Sharon could see where she was going in life and I think I just gave her a few ideas. She’s got the bug, that addiction to keep on going.’