The thousands of inmates languishing in North Korea’s prison camps endure the worst the regime has to offer, according to former camp guards.

“Those who die are the lucky ones,” said one former guard. The North Korean prison guards “do not see them as human beings, just as animals,” Lim Hye-jin, the first former female guard to speak openly about her experiences, told Daily Mail in a recent interview.

The stories from these camps are shockingly horrific.

Lim described this incident as one of the most terrible she saw during her seven years as a North Korean guard.

Describing another incident, Lim said that she saw a guard strip a woman naked and set her on fire. “We were manipulated not to feel any sympathy for prisoners,” she said, “We were told they had committed terrible crimes.” 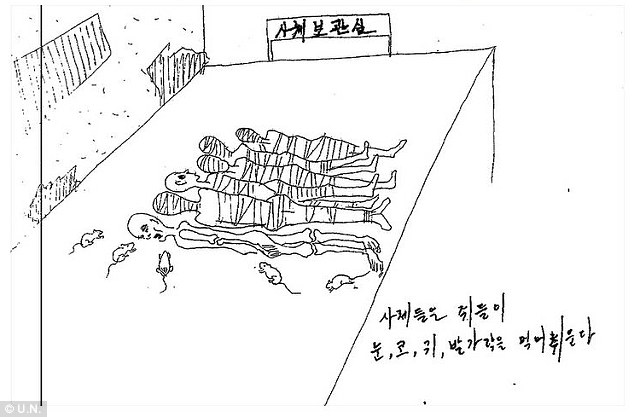 <
►
>
Horrendous: This drawing by a former North Korean prison guard of torture at a camp is describing a position called 'pigeon torture'. where 'prisoners are reportedly beaten on the chest until they vomit blood'

Prisoners work seven days a week in harsh and unforgiving conditions. One survivor, of which there are very few, told reporters deadly accidents are fairly common in the mines. An underground gas explosion once cost over 300 inmates their lives in one incident. “The guards just closed off the tunnels with others trapped inside,” the former prisoner explained.

Another former inmate said the prison guards would laugh when falling trees crushed those who worked in the forest because they were starving and too exhausted to move. Hundreds are believed to have perished digging the tunnels at North Korea’s Punggye-ri nuclear test site. In winter, the injured were tossed out in the snow to freeze to death.

Guards regularly raped female prisoners, Lim introduced, adding that if a woman became pregnant, the prison guards would force her to have an abortion or kill her. If a woman gave birth, they would sometimes beat the child to death or bury it alive.

The North Korean guards were never punished for the murders they committed. “Even if a guard was driving and ran over a child,” Lim explained, “there would not be real punishment.”

In certain cases, guards were rewarded for their inhuman acts of brutality. “One man dragged two men and three women to the fences, then shot them claiming he’d caught them escaping,” revealed Ahn Myung-Chul, a former prison guard. “He was rewarded with admission to a top university.”

Before she defected, Lim was imprisoned briefly for engaging in illegal activities. She now lives in Seoul, South Korea, where the guilt of her past life in North Korea continues to haunt her.

North Korea is widely considered to be one of the worst human rights abusers in the world today.