Emily Ratajkowski has never been one to wear an overabundance of clothes on a photo shoot and it’s no different in this shoot for Sports Illustrated.  Emily shows off her dance moves in a topless shoot.  She’s not really good at dancing but then again I didn’t notice that until the 7th or 8th time I watched.  Enjoy yourself.

The video is titled, “Emily Ratajkowski Shows Off Her Topless Dance Moves In Tropical Kauai,” and I’d seriously recommend making sure there are zero children present when you fire it up because this is borderline too far for YouTube.

SI captioned the video, “Emily Ratajkowski goes bare and puts on a show behind the scenes of her photoshoot in Kauai.”

I’ve been on the record before that I think Ratajkowski is a little overhyped. Sure, she has a massive social media following and she posts plenty of nearly-naked photos. However, she’s just never really impressed me much, but as a man of integrity I’m willing to give her another shot. 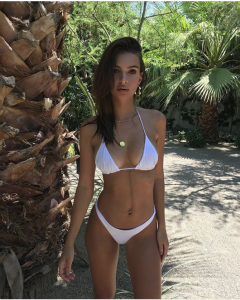