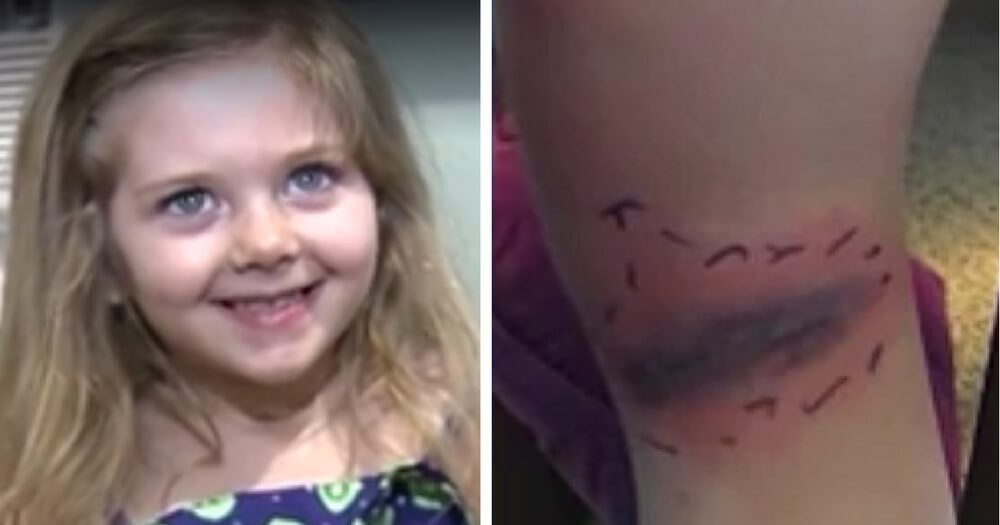 When 5-year-old Kailyn Donovan came in after spending the day outside, her mom Kristine noticed a little bruise on the back of her knee. Kristine assumed it was just a bug bite but when the “bruise” started turning black a few days later, Donovan knew something wasn’t right.

After getting a phone call from Kailyn’s school saying that she had a fever, Kristine and her husband Josh decided that they should take their little girl to the pediatrician. The doctor told the Donovans that it was just a spider bite, and gave Kailyn some antibiotics.

The little girl did not get better, and her parents were getting really worried. They took her to a medical center where doctors delivered some shocking news.

Kailyn had been bitten by a black widow spider. The Donovans were shocked that this had happened in their home state of Massachusetts.

The purple spot on the back of Kailyn’s leg that they thought was a bruise-like discoloration was actually caused by the venom from the spider. “It’s not something you would expect, especially in Massachusetts. I’ve never seen it,” said Josh.

The family is so glad that they caught the issue in time. There is no telling what could have happened if they had not kept an eye on little Kailyn.

The Donovans urge other parents to follow their instincts. You never know when something could really be serious.

“If you think it’s something, just keep looking for an answer,” said Kristine. “I had a feeling it was pretty bad, and I just kept pushing to have it checked out.”

Fortunately, Kailyn doesn’t seem to be in much pain from the bite. Thanks to Kristine and Josh’s persistence in finding out what was wrong with their daughter, she will be just fine after a few days of healing.

When in doubt, it’s always better to be safe than sorry. This is especially true for parents dealing with young children. Never underestimate just how dangerous something is, especially if you aren’t 100% sure what the problem is. It is always best to seek professional help when you don’t know what to do.