When a Michigan mom went into her son’s room to clean it for him, she saw that he had left a ball of string in the middle of the floor. The mom, Jillian Duke, was not surprised by her boy’s messiness. He still relied on her to do the cleaning and wasn’t ashamed of living in a pigsty. But when she leaned forward to pick up the “ball of string,” she hesitated.

Something was wrong with it. It was not what she thought. That’s when the Detroit mother of two realized this was no piece of string but a huge spider… When WXYZ in Detroit interviewed her about the viral story, she told the reporters: “I went to go reach for it and I kind of backed up and I said that’s just too much string.”

She was shocked that the piece of string had eyes. She couldn’t believe that this large spider was living on the floor of her 21-month-old son. And she had to admit that the spider was bigger than any she had ever seen. In truth, it was one of the biggest ones to live on planet earth.

Because she couldn’t believe her eyes, Duke logged onto Facebook and shared a picture of the spider along with the following caption:

“Found this MONSTER furry spider in my son’s room this morning. Thank God my daddy came over to get it out. Mind you, he’s almost 73 and has lived, traveled and worked all over the world and has never seen a spider like this. I’m so concerned because it could have hurt or done worse to my child. My dad thinks its poisonous for sure. (He practically ripped his room apart to make sure there weren’t anymore) but anyone have a clue to what this is? Thinking of taking it to a vet or animal clinic to find out what kind this is.”

After a close look at the arachnid, Randy John Lee, who works at Pets and Things, a pet store in Detroit that specializes in spiders, told WXYZ that the spider in Duke’s toddler’s room was none other than an Australian huntsman.

Huntsman spiders are native to Asia but are found in Australia, Africa, and South America – very warm climates. Not a place like Detroit. Sometimes they’re spotted in California, Florida, and Texas.

Because Huntsman spiders’ legs can grow up to 2 inches long, they are very scary. But luckily the venom they carry in their large fangs is not harmful to humans.

But Duke still needed answers. Why was this subtropical spider staring back at her from her son’s floor? 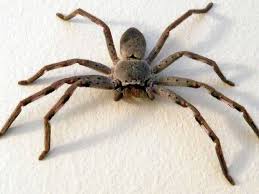 She killed the spider with a stack of books.

“I have two children, how would you feel if that were your kid,” she said.

Only later, when the spider was killed, did Duke bring it to Pets and Things. The store verified it was a huntsman and then they reached out to Cranbrook Institute of Science, who also verified the spider as a huntsman.

The pet store employee had four words to conclude his statement. “It shouldn’t be here…” he said.