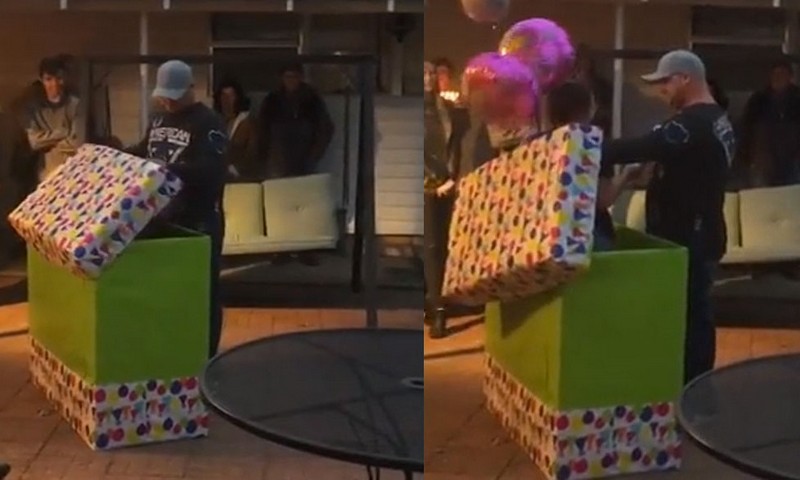 There are all sorts of birthday gifts that this 35-year-old Oklahoma man could have imagined receiving on his birthday, like a tool kit, hunting gear or something for a mancave. But according to Shareably, what he saw when he opened his oversized birthday box present had him breaking down with tears of joy.

What is so revealing about the heart of this Grady County, Oklahoma man was even with all of the party balloons, presents and celebration activities he was overwhelmed by what his stepdaughter brought him when she stepped out of the giant gift box.

The young 12-year-old greeted her stepdad with a gift, Jamylyn wanted to share with him as a testimony for what he had done for her ever since he raised her from four-years-old. It appeared that unbeknownst to her stepdad, her biological father had signed the necessary documents to transfer parenthood via adoption to her stepdad. The biological father simply had not been involved in her life for the vast majority of Jamylyn’s childhood years.

As the 12-year-old’s stepdad’s birthday approached, she and her mom worked together to arrange for total surprise gift for him. It appears that the family had been discussing the idea about officially adopting Jamylyn.

The day of the birthday Jamylyn’s stepdad was still completely in the dark. She stated, “We went to my parents’ house, he knew we were having a birthday get together, but not that he was getting a big surprise,” reported Shareably.

As the young girl’s step dad begins to open the rather large gift he not only finds his step daughter Jamylyn inside but he is handed an enveloped by her. He slowly opens it and see the adoption paperwork and a simple note that read: “Will you adopt me?”

The stepdad’s reaction to the question is obvious. He immediately is brought to tears and his wife insisted that those tears of joy were the real deal because, according to Jamylyn’s mother, “That’s not something that occurs often as he’s not the crying type.”

Immediately, the man is emotionally overwhelmed and brought to tears – and according to Jamylyn’s wife, that’s not something that occurs often as he’s not the crying type.