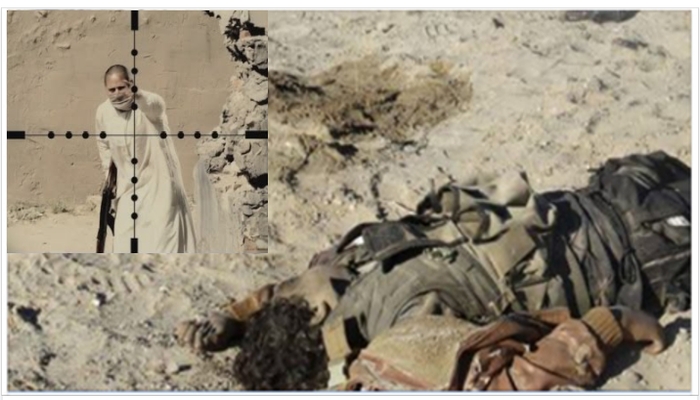 Just before three ISIS terrorists were about to shoot into a crowd of women and children, a British Special Air Service marksman took action and killed all three with a single bullet.

According to The Daily Star, an SAS intelligence group was closely monitoring ISIS activity in a remote village outside of Mosul in September 2016.

Although the British forces tried to remain hidden, they felt compelled to act when, one day, three senior ISIS leaders were prepared to shoot dozens of women and children attempting to escape.

The terrorists, sitting in a second-story window, aimed heavy artillery at the fleeing civilians when the SAS team decided to compromise their hideout location and open fire. In what one source called “a one in a million” shot, a marksman killed all three ISIS leaders with a single bullet.

The bullet hit the first extremist in the head and then went straight into the chest of another gunman standing behind him. The bullet then ricocheted off the wall and struck the third terrorist in the neck. All three were killed instantly.

“There was no way it was planned that way,” said an anonymous eyewitness source to The Star. “The sniper aimed to take out the first gunman and then try and kill the other two before they could open fire on the women and children.”

The shocked SAS members entered the terrorist compound to confirm that the gunmen were actually dead.

“Nobody could believe what happened,” said the source.

Once the kills were confirmed, the British intelligence officers took photos of the scene and collected fingerprints.

“There have been some amazing SAS kills in the past but nothing quite like that. Three kills with one shot will go down in the regiment’s history.”

According to Daily Mail, the extremists were making their way to Mosul, the last major stronghold of the Islamic State. In 2014, a U.S.-led coalition joined Iraqi forces to recapture the city. The territory has been contested ever since.