A heroic Egyptian tank crew was credited with saving up to 50 people from a car bomb laden with explosives. The tank spotted the car racing towards an army checkpoint in North Sinai and drove head-on to meet them.

It then proceeded to run the car over, which contained four gunmen and 100kg of explosives, while civilians could be seen fleeing for cover. As the tank retreated the car exploded in a huge ball of flame, sending a shockwave rippling through the desert. 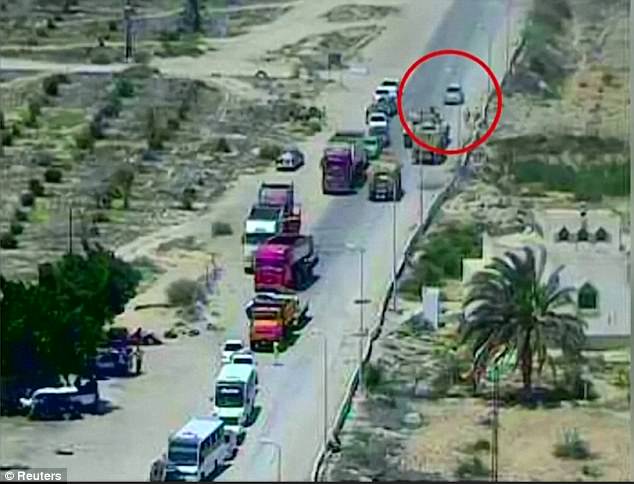 Tragically seven civilians – including two children – were reported to have died. But if it had not been for the tank it is likely dozens more would have been killed.

An Egyptian Army spokesperson claimed that up to 50 civilians and military personnel were saved from death. He added: ‘The armed forces reiterates that such terrorist acts only strengthen our determination to continue to eradicate this terrorism in our beloved Sinai from the roots.

‘The armed forces will continue to sacrifice all that is precious, our sons’ lives, in order to preserve and protect this nation and its great people.’

The Egyptian military has been waging a battle in the remote Sinai peninsula against insurgents backed by ISIS. It reportedly killed more than 40 terrorists in a new campaign against them.

A military source said soldiers were staying put in locations they cleared of the militants, rather than withdrawing as in past campaigns. He said: ‘After storming terrorist hideouts, the soldiers are staying there.

‘The terrorist elements are fleeing and leaving their weapons behind.’

ISIS has launched deadly attacks on the Egyptian military and police, most recently on a checkpoint in Sinai on July 7 that killed at least 21 soldiers.