Kirstie Wilson, from Bexleyheath, Kent, was diagnosed with the disease three years ago after refusing to accept the original diagnosis.

You can also see the whole article that lead to this horrible deal. So sad for her…..

A BRITISH WOMAN IS HOPING FOR A MIRACLE AFTER DOCTORS DISMISSED HER STOMACH CRAMPS AS ‘GROWING PAINS’ – WHICH TURNED OUT TO BE DEADLY CERVICAL CANCER.

After being dismissed by her GP three times, she begged to be referred to a specialist.

It was only then that she received the crucial smear test that detected abnormal cells.

Despite undergoing surgery and being given the all-clear, the disease returned with a vengeance, spreading to her liver and spleen.

She died yesterday (21 September 2015) surrounded by her friends and family, it was announced today.

Footballer John Terry today led tributes to Miss Wilson, a who was a Chelsea fan.

As one of her idols, she had met him as part of the ‘bucket list’ she had put together as her illness worsened.

Today, one of her friends contacted the captain on Instagram to inform him of her death, to which he responded: ‘I heard the terrible and heartbreaking news today. So young. I will get in touch with Kirstie’s family.’

Miss Wilson’s father Gary, a Chelsea season-ticket-holder who would regularly go to games with his daughter, also paid tribute to her today

‘It was Kirstie’s character and determination that prolonged her life,’ the Evening Standard reported.

‘Right up until the end she was positive, fighting. She was one in a million as a daughter, I couldn’t have asked for anyone better.’

The 52-year-old banker added: ‘She died peacefully in her own bedroom just as she had wanted, surrounded by her family and her memorabilia.’

The NHS offers a free cervical screening test to all women aged 25-64 every three to five years.

Currently the test is not offered routinely to women aged younger than 25 – such as Miss Wilson – because cervical cancer is so rare in women of her age.

While a smear is not a test for cervical cancer, it identifies early abnormalities which, if left untreated, could develop into cancer of the cervix (neck of the womb).

A sample of cells is taken from the cervix and sent to a laboratory for analysis.

Those whose cells show abnormalities are called back for further investigation and, if necessary, treatment.

In January, when MailOnline first reported Miss Wilson’s plight, she said: ‘I had all the symptoms of cervical cancer but because I was 17 at the time, doctors ignored my concerns.

‘I was bleeding in between periods and I was in agony, but doctors diagnosed me with thrush and growing pains.

‘You know your own body and I knew there was something seriously wrong when the pain and bleeding persisted.’ 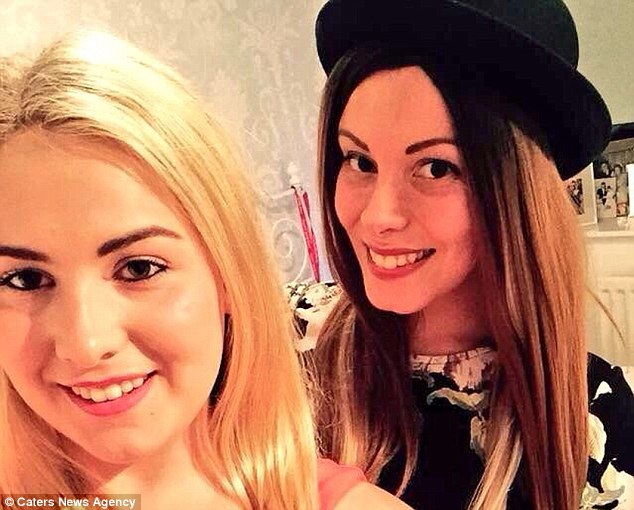 When her GP dismissed the symptoms three times, Miss Wilson (right, with best friend Amy, left) begged to be referred to a specialist. It was only then she received the crucial smear test that detected abnormal cells 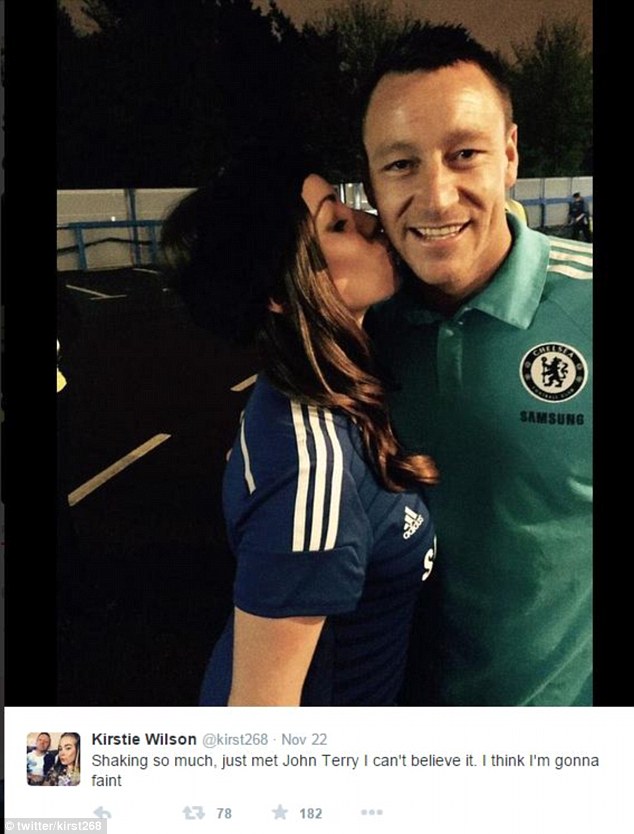 Footballer John Terry today led tributes to Miss Wilson, a who was a Chelsea fan. As one of her idols, she had met him as part of the ‘bucket list’ she had put together as her illness worsened

Miss Wilson visited her doctor a total of three times before she was referred to a specialist.

She added: ‘It took me four months of going back and forth to my GP before I was given a smear test.

‘I wish I had been given a smear test when I first visited my doctor, as it might have saved my life.’

Some recognised symptoms associated with cervical cancer include:

Abnormal bleeding: during or after sexual intercourse, or between periods

Post menopausal bleeding, if you are not on HRT or have stopped it for six weeks

Discomfort or pain during sex

Before her death, Miss Wilson went on to campaign for women to have smear tests on demand and for improved access to drugs on the NHS for cancer sufferers, and raised thousands for Cancer Research.

She was also involved in a petition criticising cuts to the Cancer Drug Fund and calling for a review of how cancer drugs are funded on the NHS.

When Miss Wilson was first diagnosed with cancer in May 2012, she underwent surgery known as a radical trachelectomy.

This removed her cervix but meant she would be able to have children in future.

The operation was a success and she was cancer-free for nearly two years.

‘I had smear tests every three months and every time they came back normal,’ Miss Wilson said.

But by April 2014, her joy at beating cancer so quickly had turned to fear when her stomach became abnormally bloated.

Miss Wilson said: ‘I looked about eight months pregnant and I was struggling to breathe. 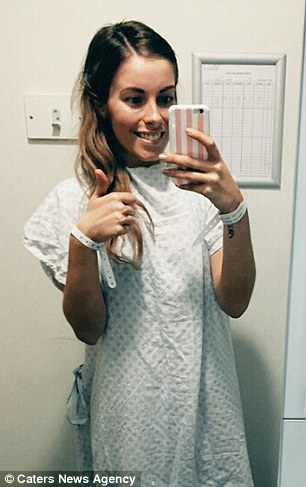 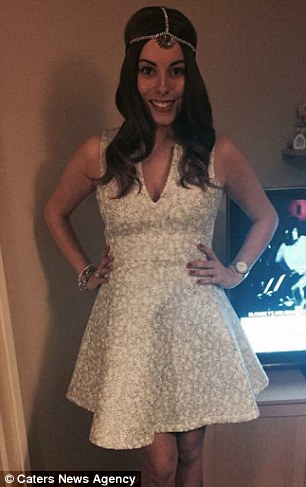 When Miss Wilson was first diagnosed with cancer in May 2012, she underwent radical surgery to remove her cervix and save any hope she of having children 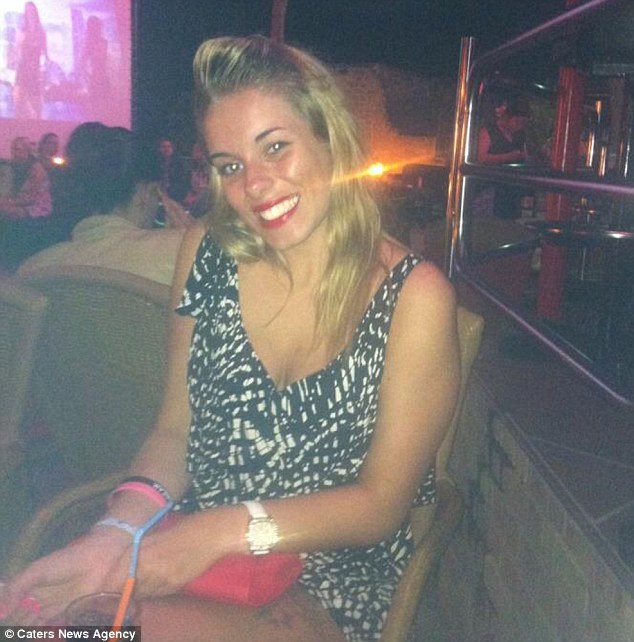 ‘I knew something was really wrong when I couldn’t keep up and dance with my friends on a night out.

‘My best friend Amy came with me to A&E the following day as I was in agony and struggling to walk.’

There, Miss Wilson had two litres of fluid drained from her chest and a further eight litres from her stomach.

A biopsy then confirmed her worst fears.

‘The cancer had returned and despite several clear check-up smear tests, it had spread to my liver and spleen, she said.

‘Doctors believe my cancer wasn’t spotted on my smears as it was so small.’

The next step was intense chemotherapy – something that left her devastated.

She added: ‘I was heartbroken when I realised the chemo would make my thick blonde hair fall out.

‘I’ve always enjoyed styling it and knowing I would lose it was awful.’

Fortunately, she was offered a  ‘cold cap treatment’.

This involved freezing her head to -4C during her chemotherapy so her hair follicles weren’t destroyed.

But by April 2014, Miss Wilson began to fear the worst when her stomach became abnormally bloated. ‘I looked about eight months pregnant and I was struggling to breathe,’ she said 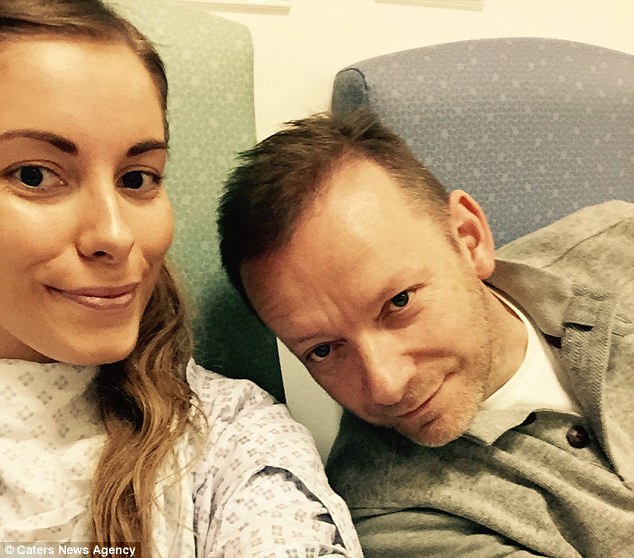 Instead of giving up, Miss Wilson (pictured with her father) searched for medical trial in a desperate bid to save her life. But the cancer continued to take hold and she died yesterday, surrounded by family and friends

‘My hair did still fall out in clumps, but it meant I kept a little pony tail at the back and my scalp was still mainly covered with thin hair.

‘My friends and I began gluing hair extensions inside hats so that when I went out, no-one would know I was ill, they were amazing and felt comfier than wigs.’

But after three months of chemotherapy, a CT scan revealed her tumours weren’t shrinking – she had become immune to the drugs.

There was no other treatment available for Miss Wilson on the NHS and she was told to make a list of things she wanted to do before she became too ill. ‘I was devastated but I needed to stay focused on how to beat cancer rather than a bucket list,’ she said.

‘I wasn’t ready to give up and even though my mum, Karen and dad, Gary, were distraught with the prognosis, they knew we needed to find a new treatment plan and quick,’ she said.

‘My dad took it upon himself to research medical trials in the UK, Germany and Chicago.’

She spent a month without having any treatment before a medical trial at the University College London Hospital became available to her.

She said: ‘My hair had just grown back and I refused to undergo any more treatment that would leave me feeling unwell as well as bald, I had already suffered enough.

‘But this new trial was a type of chemotherapy that wouldn’t damage my hair alongside a drug that is still in the testing phase so I couldn’t wait to start, it gave me hope.

‘Doctors have made it clear that my treatment plan may not cure me but it will prolong my life.

THE CERVICAL SCREENING PROGRAMME – WHAT IS IT AND WHO IS ELIGIBLE? 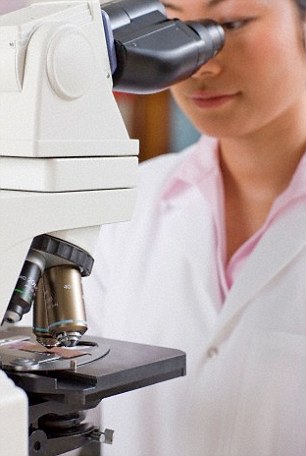 Cervical screening is not a test for cancer, but it identifies early abnormalities, which, if left untreated, could develop into cancer of the cervix

The NHS offers a free cervical screening test to all women aged 25-64 every three to five years.

It is not a test for cervical cancer, but it identifies early abnormalities which, if left untreated, could develop into cancer of the cervix (neck of the womb).

A sample of cells is taken from the cervix for analysis and sent to a laboratory for analysis. Those whose cells show abnormalities are called back for further investigation and, if necessary, treatment.

Currently the test is not offered routinely to women aged younger than 25 because cervical cancer is so rare in women that young.

According to Cancer Research UK statistics, not a single woman under the age of 20 died from cervical cancer between 2009-2011.

The lower age of 25 was raised from 20 after the Advisory Committee on Cervical Cancer Screening (ACCS) advised the NHS in 2003 that cervical screening in younger women did more harm than good.

The committee advised that cell abnormalities in younger women normally went away of their own accord, and said that sending young women for further tests and treatment increased the likelihood of the woman having pre-term delivery if she went on to have children, and could cause significant anxiety.

Many other countries offer cervical screening from the age of 25, including Italy, France, Belgium and Ireland.

In Australia women are invited from 18, Greece from 20, and in the US two years after women become sexually active.

Meanwhile, other countries start cervical screening later. Both the Netherlands and Finland offer screening to women only once they are 30, and these two countries boast some of the lowest mortality rates for cervical cancer in Europe, and in Bulgaria it is for women over 31.

‘My fertility has been ruined due to chemotherapy which upset me as I had always wanted children but I can’t change any of what’s happened to me so I’m trying to live my life to the full.

She said at the time: ‘I’m just hoping for a miracle.’

Throughout Miss Wilson’s cancer battle she raised more than £6,000 for Cancer Research and Macmillan alongside her friends and family.

She added: ‘I just wanted to give something back to the charities that have helped me.

‘I have been supported religiously by my mum, dad, brother, Dale, and best friends, Amy and Victoria.

‘I hope other young women read my story and look out for cervical cancer symptoms.

‘I strongly believe that no matter your age a smear test should be given on demand.’

The Cancer Drug Fund petition can be found here.