Whoa, Antifa Just Found Out Something That May Crush Them….

This Is The Real Reason The Elites Didn’t Want Elon Musk Buying Twitter….

Another Hollywood Actor Has Packed Up His Family And Left California….

Actor Randy Quaid has performed in over 90 films and has been nominated for just about every prestigious film award under the sun, and he has also been a fugitive from justice for tax evasion.

On Sunday night, actress Meryl Streep took to the stage at the Golden Globes and proceeded to disrespect and insult President-elect Donald Trump. Apparently, Quaid was either watching, heard or read about the entire charade because he penned an open letter to her on his Twitter account.

Although Quaid said he “empathizes” with the Streep’s feelings over the democrats having lost the election, Quaid could not overlook the glaring hypocrisy that every word of Streep’s speech was dripping with.

Quaid’s letter spoke of how “bullying” even occurs in the entertainment industry:

“You stated in your speech that ‘when the powerful use their position to bully others, we all lose.’ You’ve got bullying galore going on right in front of you, but either you’re pointedly ignoring it or you just don’t have a clue.”

Streep recently starred alongside Hugh Grant in a film titled “Florence Foster Jenkins”. Grant and Quaid have something in common, both having had their own experience with “fake news” disparaging their reputation and character.

That, according to Quaid, is something Streep simply cannot relate to:

“How nice it must be not to have a breath of fake negative press ever written about you, or lies manufactured against you by dishonest media attacking your character, your spouse, and your career.”

Then, he detailed how he was “bullied” by the very people she praised in her speech. Quaid wrote that he:

While Streep claimed to be a voice for those who are voiceless, Quaid wondered where she was when he was being attacked:

“When all of these things happened to me, no one in Hollywood, including you, came to my side. Forty years in the business and not one brave soul stepped forward to put in a good word affirming my professionalism and character.”

Unlike many people who have praised her speech, the actor used his voice to call out the real reason he thinks the actress is upset. He wrote:

Quaid claimed the “biggest shocker” to Hollywood was that their voices don’t matter when their fans realize how big the country’s problems are. He wrote that the public wants “trust” and doesn’t like “being lied to by NBC and CNN, you or anybody else.”

He went on to describe what artists should be celebrating:

“The good news is that the American people have finally found their voice concerning corporate agenda’s control and corruption of our news feeds and political results. As artists, that’s what we all should be celebrating.”

Quaid ended his letter with a suggestion as to how Streep can “fix her broken heart.” He concluded:

“Personally and professionally, I would be honored to work with you on any project to fix your broken heart through art, and perhaps you can help me to fix mine, and perhaps together we can entertain and fix America’s broken heart.”

Randy Quaid may not receive a lifetime achievement award anytime soon, and he may seem a little off his rocker, but he’s still with it enough to be one of an ever dwindling group of Hollywood entertainers who isn’t a liberal fool.

Here is the full letter: 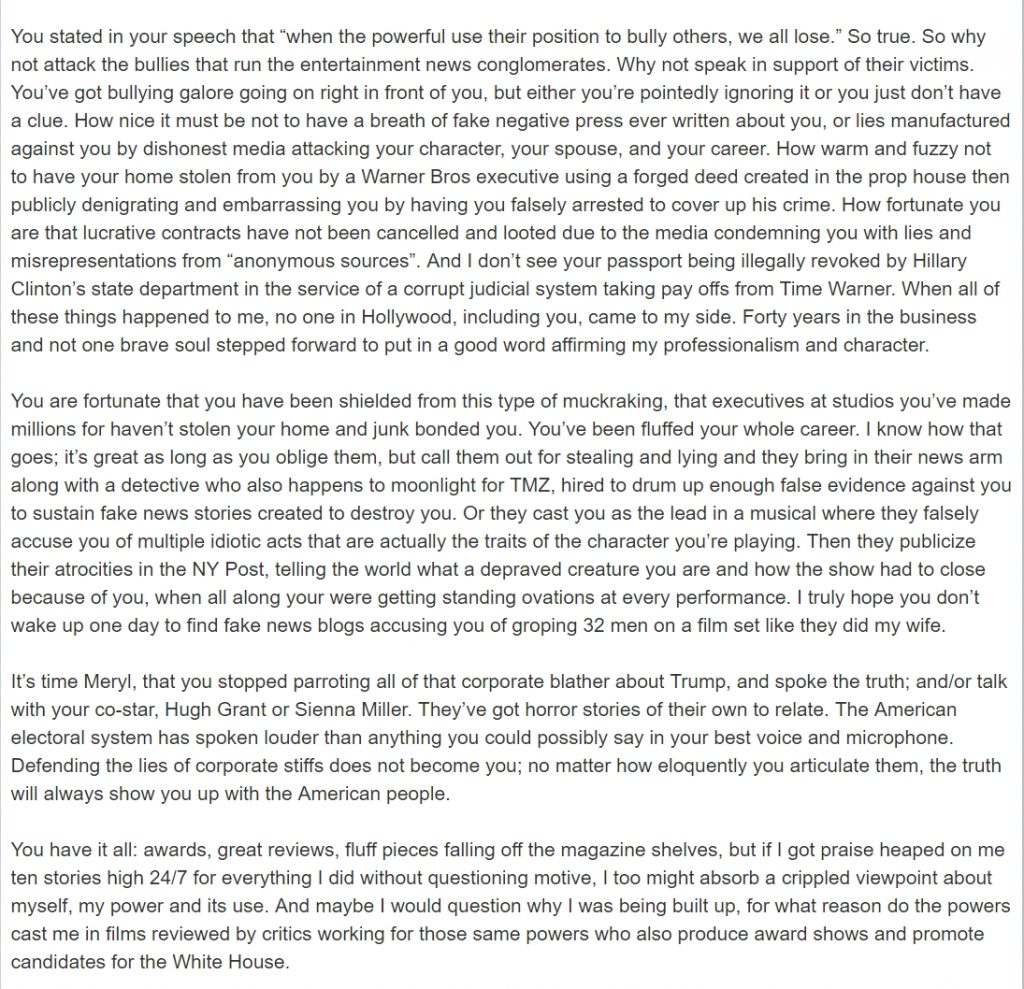