Derek Madsen from Sacramento, California was 10-year-old when he was diagnosed with neuroblastoma, a rare form of cancer that mostly affects children. It was in summer 2005, when while rest of the children his age were preparing for summer camp, Derek and his mom, Cindy French were preparing to battle the deadly disease. The treatment started immediately.

Cyndie French, embraces her son, Derek Madsen, 10, on July 25, 2005, after learning Derek needs surgery to remove a cancerous tumor in his abdomen. The emotional impact is taking its toll on her. “How can anyone maintain a nine-to-five job and do this?” she begins to wonder.

Cindy took Derek for a spin down the hall of the UC Davis Medical Centre, while waiting for Derek’s bone marrow to be tested to see if he is eligible for a transplant. Little did Cindy and Derek realize, this much needed distraction “joy ride” was just the beginning of an emotional roller coaster ride that will change their lives forever.

Bone marrow extraction, an excruciatingly painful process, caused Derek to scream and writhe in pain. After he woke up from the operation, Cindy tried to comfort him as much as possible. It would have been very tough to see him suffer! 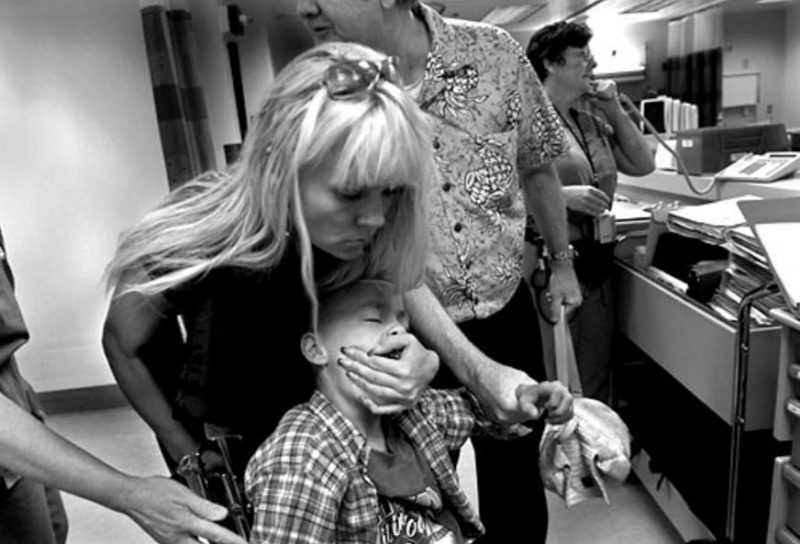 Derek received a gentle head massage from his mother. Cindy gave up her beauty salon, so that she could be there for Derek full-time. The cancer has spread to his organs and bones and he needed round-the-clock care. Cindy said “I’m going to do whatever it takes to make him happy, to see him smile.”

In this picture, Derek is seen playing with his brother Micah and his friend RJ at a hotel in Tahoe, after they were invited to meet Chris Webber, a famous basketball player. Cindy had written to the NBA star and he agreed to meet them. It was the first time that Derek had the opportunity to spend time in a real hotel…These were the rare happy moments in the young child’s life…carefree and playing!

Derek hated hospitals, and he also loved to keep his mom on tenterhooks by performing scary balancing acts. Cindy had tough time getting him to come down and take him into the building, where he would be prepared for an operation.

“Derek is comforted by his brother Micah Moffe, 17, left, and mom Cyndie, right, as he gets a tattoo in preparation for radiation therapy for cancer during an orientation in radiation on November 30, 2005 at UC Davis Medical Center. Micah often accompanies Derek to treatments even though his schoolwork suffers.”

“On Feb. 6, one of Derek’s cancer doctors recommends she contact hospice workers. Cyndie doesn’t tell Derek about the conversation, but retreats behind a closed door at home to cry. ‘I don’t think it’s important to tell him,’ she says. ‘Why? What for?’ Sensing her sadness, Derek tries to cheer her up.”

“Realizing her son may never have an opportunity to get his driver’s license, something he’s told her he is anticipating, Cyndie defies the rules and lets 11-year-old Derek drive up and down their street in West Sacramento while sitting on her lap.”

“Derek refuses to take pain medications because he fears damaging his organs. He rages at his mother on April 28, 2006, blaming her for not making him healthier. ‘You have to calm down and help me help you,’ Cyndie says.”

“Derek kisses his mom Cyndie after the Relay for Life benefit, as his 6-year-old sister, Brieanna, stands by.”

“In an effort to get Derek outside, Cyndie wheels him through the front door passing by artwork and cards given to her son by classmates at Bridgeway Island Elementary School. It was his last trip outside.”

“Cyndie fights her emotions May 10, 2006, as she prepares to flush out Derek’s catheter with saline solution before hospice nurse Sue Kirkpatrick, left, administers a sedative that will give the 11-year-old a peaceful death. ‘I know in my heart I’ve done everything I can,’ Cyndie says.

Cyndie tearfully rocks her dying son Derek, 11, as the song “Because We Believe” plays. From left, family friends Ashley Berger, Amy Morgan and Kelly Whysong offer comfort as Cyndie tells Derek, ‘It’s OK, baby. I love you, little man. I love you, brave boy. I love you. I love you.’”

“Cyndie leads Derek’s casket to burial with assistance from her sons Anthony Moffe, foreground, Micah Moffe, opposite him, and Vincent Morris, who is not visible, as well as several friends. ‘I will forever carry your memory in my heart and remind others to give of their time, energy and support to other families like ours,’ Cyndie says at the funeral.”