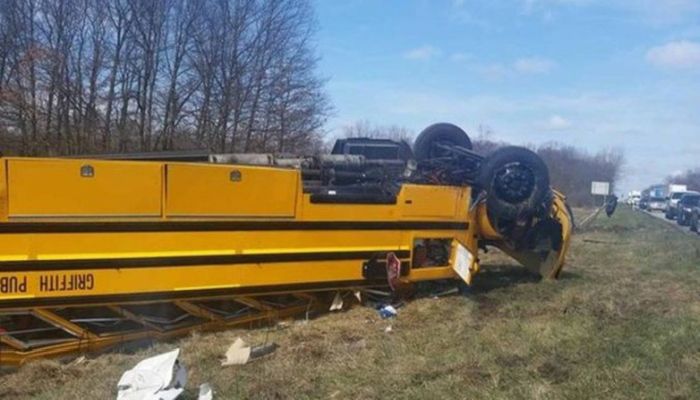 After spilling a drink on herself, a woman sideswiped into a school bus transporting more than two dozen individuals, which caused the large vehicle to overturn on the side of the expressway.

According to Indystar, a school bus consisting of 21 members of the boys basketball team from Griffith High School in Griffith, Indiana, and six adults was on its way to a state semi-final game when it flipped into a ditch. Indiana State Police determined that a motorist in another car spilled a drink on herself, which caused her to sideswipe the bus, .

Martin Schele, a point guard on the team, said the incident happened approximately 45 minutes into the trip, and that people were “ricocheting off the bus” as the vehicle was flipping, according to an interview that aired on ABC’s “Good Morning America.”

“So when the bus finally settled down and stopped flipping, everybody was just screaming,” Schele recalled. “Objects were flying everywhere from the top to the bottom of the floor. All of the teammates started rushing out the emergency door to find a way out.”

“I had to cry,” said student Grey Teamer, as reported by WLS-TV News. “I just started crying. It was a scary thing for me. Something that I don’t want to witness again.”

Although the incident was a frightening experience for all, Schele reported that the bus was out of control for about 30 seconds, and that it only took a couple minutes for everyone to leave the vehicle.

Everyone on board the vehicle was sent to the hospital. All injuries are reported to be non-life-threatening.

“We are all sore but other than that no serious injuries,” said player Anthony Quintero.

“God performed a miracle for them; truly a miracle that nobody is deceased,” said Dawn Jones, resident of Griffith.

The team members are grateful that no one has suffered any serious injuries, and that the community is invested in their well-being and recuperation.

“Seeing all these people here supporting us really makes us happy, makes us get back on [our] feet and give us the adrenaline to get started over again and bring back a state ring,” said Teamer.