Unidentified congressional aides and immigration experts told Reuters that Trump will likely order the State Department to stop issuing visas to people from those nations. The president could also tell Customs and Border Protection to block people with current visas.

The ban will reportedly remain in place for a number of months until the State Department and the Department of Homeland Security develop a more difficult vetting protocol.

Time magazine noted in November 2015 how difficult the protocol is for Syrian refugees to enter the U.S.

Stephen Legomsky, a former chief counsel at U.S. Citizenship and Immigration Services in the Obama administration, told Reuters: “From a legal standpoint, it would be exactly within his legal rights. But from a policy standpoint it would be terrible idea because there is such an urgent humanitarian need right now for refugees.” 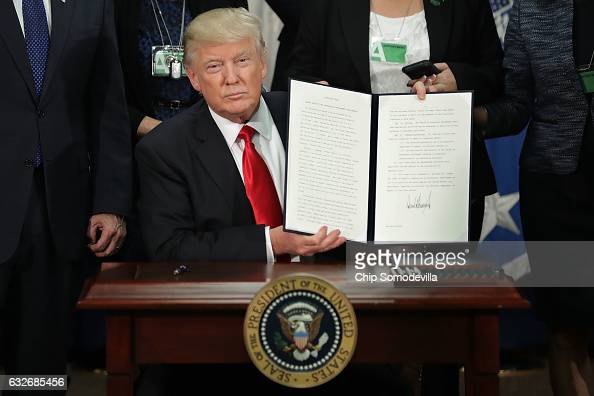 Two unidentified Trump administration officials told The Associated Press that the president will also start his plans for a wall on the U.S.-Mexico border.

In more political news, U.S. Secret Service agent Kerry O’Grady wrote on Facebook in October 2015 that she supported Democratic presidential nominee Hillary Clinton, and would rather do “jail time” rather than take a bullet for an unidentified candidate believed to be Trump, notes the Washington Examiner.

As a public servant for nearly 23 years, I struggle not to violate the Hatch Act. So I keep quiet and skirt the median. To do otherwise can be a criminal offense for those in my position. Despite the fact that I am expected to take a bullet for both sides.

But this world has changed and I have changed. And I would take jail time over a bullet or an endorsement for what I believe to be disaster to this country and the strong and amazing women and minorities who reside here. Hatch Act be damned. I am with Her.

O’Grady recently told the newspaper that she removed the posting a few days later.

“It was an internal struggle for me but as soon as I put it up, I thought it was not the sentiment that I needed to share because I care very deeply about the mission,” O’Grady recalled.

O’Grady repeatedly said that she would not compromise her duty to protect Trump.

“No, not at all. I firmly believe in this job. I’m proud to do it and we serve the office of the president,” O’Grady stated.