Mother-of-two ‘drowned’ in paint after boyfriend poured it down her throat, battered her with an iron and burned her alive

A thug who battered his mother-of-two girlfriend with an iron before ‘drowning’ her in paint and burning her alive has been jailed for life.

Anthony Porter, 33, murdered his partner of 18 months Andraya Lyons, 38, after rowing with her during her work Christmas party at a Marriott Hotel in Swindon, Wiltshire.

He followed her home after texting his sister ‘Some of us are angels, some of us are demons, and tonight the demons won.’

After the violent attack, Porter made a hasty attempt to cover up his crime before he handed himself into police. 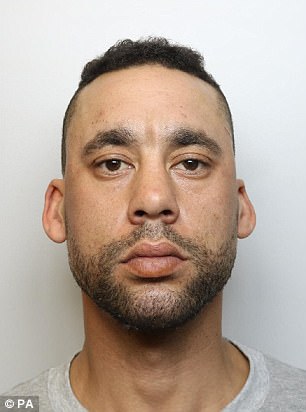 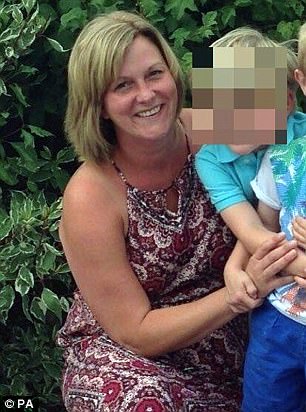 Anthony Porter, left, murdered his partner of 18 months Andraya Lyons, right, after rowing with her during her work Christmas party

Bristol Crown Court heard that Porter forced his way into her home and hit over the head with an iron, stamped on her face and poured thick paint down her throat.

He then placed gas canisters between her thighs and doused her with white spirit before setting her on fire while she was still alive.

Firefighters were called after neighbours smelled smoke and discovered Ms Lyons’ charred body on the living room floor at around 5.30am.

They found blood on the iron, porch, kitchen walls, and in the living room, and Porter’s footprint in the grey paint he had poured on his girlfriend.

Porter yesterday admitted murdering Ms Lyons, who leaves behind two sons aged five and eight, and was jailed for life with a minimum of 17-and-a-half years.

Judge Peter Blair QC told him he would be subject to the sentence ‘for the rest of your life’ for the ‘dreadful’ murder.

He said: ‘She was entitled to feel safe and secure from you in her home but you broke in and you set about attacking her in a vicious way, using an iron and kicking and punching her.

‘The assault started on the porch and went into the living room. It is clear this is a sustained assault. She was screaming for you to get out.

‘It is clear you inflicted suffering on her, both mentally and physically.’

The court heard that Porter was arrogant and selfish towards Ms Lyons over the course of their relationship, hitting and spitting at her.

On the night of the murder, he accompanied her to her work Christmas party at the Marriott. 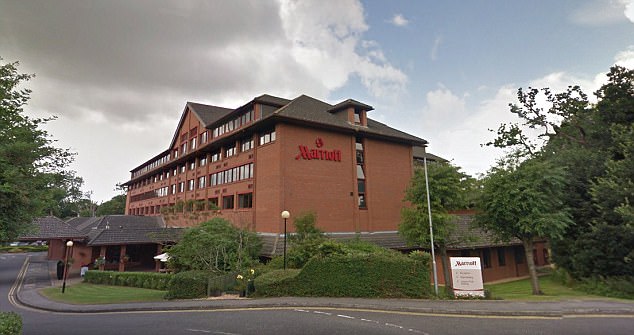 On the night of the murder, he accompanied her to her work Christmas party at the Marriott Hotel in Swindon, Wiltshire

He was ‘drunk, aggressive and lewd’, it was said, and at one point he had to be pulled off his girlfriend after she ‘told him it was all over’.

Prosecuting, Colin Meeke said: ‘Things got so bad that her friends arranged she would go home with them instead of going to her home address.

‘As the taxi drove off he punched the taxi window and was overheard saying he would break into the house and torch it.

‘The taxi took her to her home address so she could collect some personal belongings. She decided she would stay at the house and said he wouldn’t be a problem, it was alright.’

The prosecutor said Ms Lyons’ friends, who last saw her alive at 1.20am, begged her to stay with them but she ‘exercised her own free will’ and chose not to.

But 40 minutes later, at around 2am, Porter arrived at the house and launched a drink and drug-fuelled ‘frenzied’ attack on her.

Over the next three hours, neighbours heard five to six minutes of high-pitched screaming, a female voice shouting ‘let me out’ and a ‘thudding sound about 15 times’.

He finally left at around 5am, and soon afterwards firefighters were called to the burning house.

Police found that the batteries had been removed from the upstairs smoke alarm and attempts made to cover the bloodstains with white paint and a roller.

A forensic examination of her body later concluded she suffered 45 separate injuries, including bruises and a cut to her cheek, possibly from the paint can lid.

She had burns on her breasts, stomach and legs and the ‘thick, granular’ paint in her throat.

The cause of death was blunt force injury, paint inhalation and smoke inhalation.

After killing his girlfriend, Porter confessed his crime to family members, telling his sister he ‘lost control and kept hitting her to her death’.

He later visited his mother’s grave before handing himself in to police and claiming in an interview that he murdered his partner in ‘five minutes of madness’.

The court heard statements from the victim’s family, including her father Edward Webb, who was looking after her two young sons on the night of her death.

He described the ‘heartbreaking and difficult moment he had to tell the boys their mother was dead and wouldn’t be coming home’.

The prosecutor said: ‘He is appalled to lose a child in such circumstances. He feels helpless and useless. How will the family ever be able to celebrate Christmas again?’

Defending, Robert Ross said Porter was a ‘decent, hard-working man’ who had battled with alcohol addiction.

The barrister said: ‘This is clearly a man who was not thinking straight whatsoever.’

He added: ‘He wanted Andraya’s family to know that he is truly sorry for what he has done. He is truly ashamed of what he did.’

Porter was sentenced to life behind bars with a minimum of 17-and-a-half years, which was reduced to 17 years and a month for time already served.