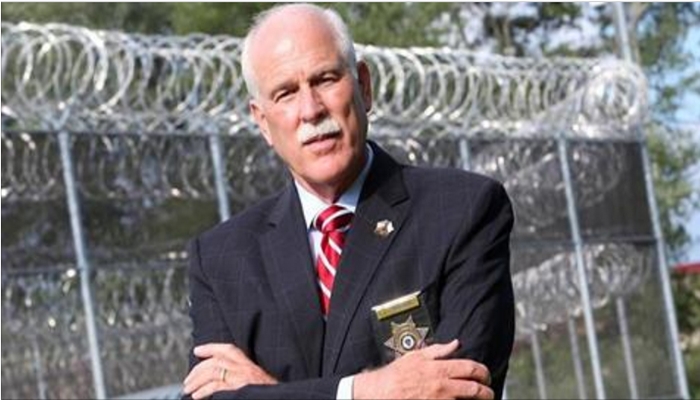 South Coast Today reports that on Mar. 28, Sheriff Thomas M. Hodgson testified before the House Judiciary Subcommittee on Immigration and Border Security. He had been invited by the subcommittee chairman, Republican Rep. Bob Goodlatte of Virginia.

Hodgson blasted jurisdictions whose law enforcement do not refer all undocumented immigrants arrested for a crime to ICE agents for deportation. The jurisdictions have been given the nickname of “sanctuary cities.”

“At best, sanctuary cities are a direct violation of trust between the legal residents and the elected officials who took an oath to protect them at all costs,” Hodgson said before the subcommittee. “At worst, it’s careless, illegal and extremely dangerous.”

The sheriff proceeded to recommend that officials who oversee sanctuary cities should be arrested.

“If these sanctuary cities are going to harbor and conceal criminal aliens from ICE… federal arrest warrants should be issued for their elected officials.”

Re-elected in November 2016, Hodgson had been a vocal critic of the Obama administration’s immigration policies as well as a supporter of President Donald Trump.

In June 2016, the Bristol County sheriff stated that Trump’s immigration proposals made him “a champion of the people.”

According to The Boston Globe, on Jan. 5, Hodgson suggested sending Bristol County prison inmates to the U.S.-Mexico border to help construct Trump’s proposed wall for free,

The Massachusetts sheriff has also been a source of controversy, having fielded a series of civil rights lawsuits over the course of his career.

“[Hodgson] has no problem violating the law if he thinks that one of his proposals will get him a headline,” said litigation director James Pingeon of the Prisoners’ Legal Services of Massachusetts.

Democratic Mayor Joseph Curtatone of Somerville, who supports sanctuary city policies, blasted the sheriff for his comments before Congress.

“I accept the sheriff’s ignorance with grace,” Curtatone told the Boston Herald. “Rather than worry about locking up mayors, maybe Sheriff Hodgson should come to Somerville and learn about real crime prevention.”

On Mar. 29, Hodgson met with Attorney General Jeff Sessions, who had recently announced that the Department of Justice (DOJ) with withhold and rescind federal funding to jurisdicitions if they are deemed to be sanctuary cities.

On Mar. 27, Sessions stated from the White House that cities that do not refer all arrested undocumented immigrants to ICE agents would be denied DOJ grants for their local enforcement budgets.

“I strongly urge our nation’s states and cities to consider carefully the harm they are doing to their citizens by refusing to enforce our immigration laws and to rethink these policies,” Sessions said, according to ABC News.

“Sanctuary jurisdictions have concluded their policies improve relations between police and their communities,” assistant professor Seth Davis of the University of California-Irvine’s School of Law told Vice News. “The administration hopes to coerce [them] into abandoning their policies, which state and local leaders have concluded are necessary for the health, safety and welfare of their residents.”