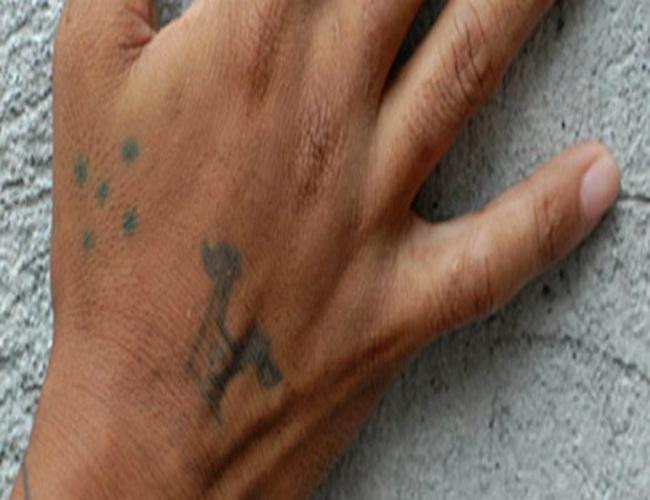 Tattoo’s and prison are synonymous. and various gangs have their own markings to distinguish friend or foe — often using “visual code” to show off their violent crimes or their gang allegiances.

Here are 5 common tattoo’s and what their meaning is.

An “AB” tattoo stands for the Aryan Brotherhood, a white supremacist prison gang and organized crime syndicate. The “AB” mark is often joined by swastikas and other forms of Nazi symbolism.
According to the FBI, the Brotherhood accounts for about 0.1% of the prison population but commits 30% of the murders within prison walls.

A teardrop tattoo below the eye is a very common prison marking.

Although it has many different meanings, a teardrop usually signifies that the wearer has committed a murder or spent time in prison.

Some notable wearers include rappers Lil Wayne and The Game, who have the tattoo to signify the death of a friend….

The five point crown is the primary symbol for the Latin Kings, one of the largest and most organized Hispanic street gangs in the United States. The gang was formed in Chicago in the 1940s and has since spread throughout the country, most notably in Los Angeles and New York City.
Latin Kings are also known for wearing black or gold colors.

The MS-13 tattoo symbolizes one of the most feared Hispanic gangs in the United States and Central America, Mara Salvatrucha.

The gang originated in Los Angeles and has since spread rapidly across the country and into Mexico and El Salvador.

The gang is known for their violent crimes and alliance with Mexican drug cartels such as the Sinaloa Cartel.

The three dots is a fairly common prison tattoo.

The three dots stand for “mi vida loca,” or “my crazy life,” in Spanish. While it doesn’t symbolize any particular gang, it is a representation of the gang lifestyle.

It is usually found below the eyes or on the hand.

So there you have it. Next time you are walking down the street and see these markings, you now have a perfect conversation starter!