The next time someone argues with you that the Press does not have an agenda towards Muslims, you can call BS. You can tell them that you know the Press is pushing the liberal agenda and have proof of it. You can do that thanks to this writer. You see, yesterday I had the privileged to attend an Anti-Shariah Law protest in Orlando, Florida. 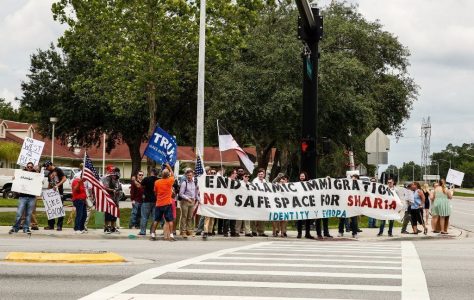 During the 4 hours I spent there with other Patriots, I was struck that we did not all look alike. I saw no Nazi Fascists running around. What I saw were men and women, Black, White, Hispanic and Asian banding together to stand up against Socialists, Muslims and Anarchists to protect your rights. Throughout the event, I heard a lot of people express concern over the constant creeping of Islamic beliefs into our Christian Nation. I also heard people say if they did not want to live here under our laws like the rest of us, they should go back to where they came from. Hardly racist remarks.

During the demonstration, I had to sit down for a few minutes. It was then I was approached by a reporter. She had no idea that I was a writer, so I though I would have some fun. She started by taking my name, and I told her Dick Grimes, next came questions about what group I was with? Was I against all Muslims and did I think we should even allow Muslims in our country?

Over the next 20 minutes, I proceed to enlighten the young lady. I told her that the group I was with was there to provide security and she immediately asked if I thought there would be trouble. I replied that I hoped there wouldn’t, but that as she knew, the opposition had a history of assaulting other people. I told her how my group had some of our women assaulted and spat on at other protests. But I also explained to her that we were there not just to provide security for our group, but also for the other side of the street.

That really shocked her. “What do you mean?” she asked. I told her we were there to make sure that everyone had the right and the ability to speak their mind and exercise their rights under the Constitution. How under Shariah Law, this protest was not possible. How you could be beaten or even killed for doing what we were doing. That Peaceful Assembly, Free Speech, even the mixing of unrelated men and women were not permitted under Shariah and could be punished by floggings or death.

I explained how that was in direct violation of our Constitutional Rights including our guarantee against cruel and unusual punishments. I also explained how the only positive influence Islam had on our country was since our founding, it provided a big enough threat by sinking our ships and making slaves of their crews that rather than pay tribute, we built one of the strongest navies in the world so we could defeat them.

Today I read her story. Trust me when I say there was not one word about anything I told her. She focused on the negativity. So much for balanced journalism. I will not embarrass her by calling her out by name, for she is no different than most of her collages, but with a few keywords typed in Google I am sure you can find the story about the Anti-Shariah protest in Orlando.