NASA allows users to go online and view shots taken by the Mars Rover.  It’s good for everyone.  People can see firsthand what the Rover is picking up and NASA gains millions of pairs of eyes to help look through the pictures and make discoveries that NASA may have missed.  But it also gives a platform to UFO enthusiasts.  Everything they see is proof of alien life no matter what it is.  Sometimes though, they appear to be right.

In the following set of pictures, it appears that they have located some kind of vehicle, with the picture being a very high resolution shot.  And it certainly looks like some kind of alien spacecraft.  But, personally, I think it could be the sky crane that was used to lower the Mars Rover to the planet’s surface to keep it from getting damaged. 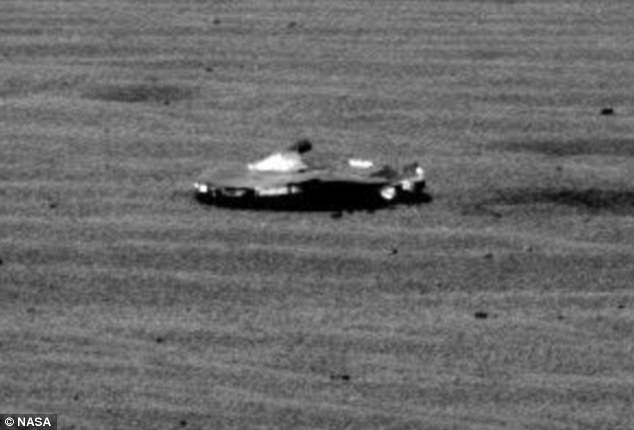 The image was taken in March, but was posted on Reddit this week, sparking a huge online debate about what it shows.

His post has received 79 replies, many of which back up his thoughts that it could be aliens.

EdisonVonneZula said: ‘Looks like light glimmering off of a genuine spaceship on an alien planet in outer space.’

And Crazylegs99 wrote: ‘They forgot to Photoshop that one out. Love how skeptical the mods are.

The user wrote: ‘We know that the Rover was taking pictures of its own entry debris at that time.
‘There’s nothing particularly alien about the object in question – it could easily be entry debris, at least in my opinion.’
And Nigel Watson, author of the UFO Investigations Manual told MailOnline: ‘It might look like a spaceship, but as usual the picture is out-of-focus and there is no guide to tell the viewer how big or small this object is.
‘One explanation is that the object is a piece of debris from the Mars Rover itself or from its sky crane landing system.
‘Unless we get more detailed information this is another case of wishful thinking.’
This isn’t the first time that conspiracy theorists have claimed that images taken by the Curiosity rover show aliens.
Yesterday, alien hunters claimed that the rover had taken images of thigh bones protruding from the red planet’s surface.
The pictures were presented in a video from conspiracy theorist group Martian Archaeology alongside several other Curiosity images that appear to show ‘signs of life’. 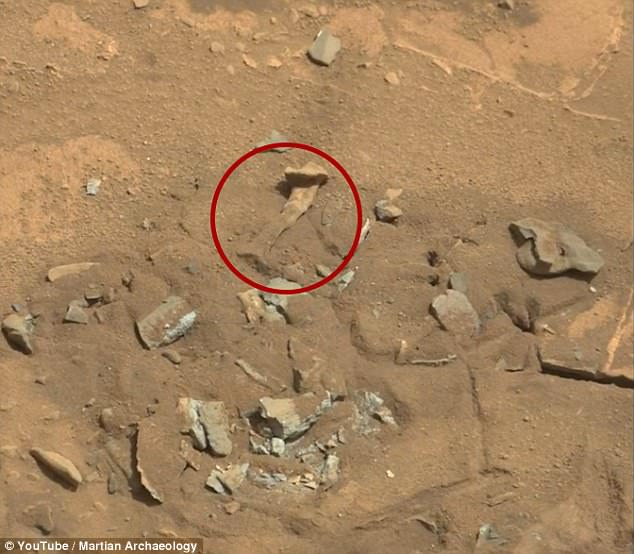 Here is a video that shows how it’s done including powering the crane away from the landing spot to avoid damaging the Rover: