General Flynn Just Said He’s Going After All Of Them!

What A Goldman Sachs Chief Just Said About Recession Is Absolutely….

CNN has announced that their host who called Donald Trump a piece of s*^t because he called for his travel ban again will no longer be on their station.  Aslan is trying to be a brave little scout and say it is okay because his style isn’t made for the journalistic world.  How cute?  He thinks CNN has journalists.  I’ll bet he believes in the Tooth Fairy and unicorns, too.

Aslan called Trump a ‘piece of shit’ after the president responded to the London Bridge attacks by tweeting: ‘We need to be smart, vigilant and tough. We need the courts to give us back our rights. We need the Travel Ban as an extra level of safety!’

He later deleted the tweet and lamented his choice of words, writing: ‘When in the first few minutes of the terror attack in London, the President of the United States tweeted about his travel ban, I lost my cool and responded to him in a derogatory fashion.

‘That’s not like me. I should have used better language to express my shock and frustration at the president’s lack of decorum and sympathy for the victims of London. I apologize for my choice of words.’ 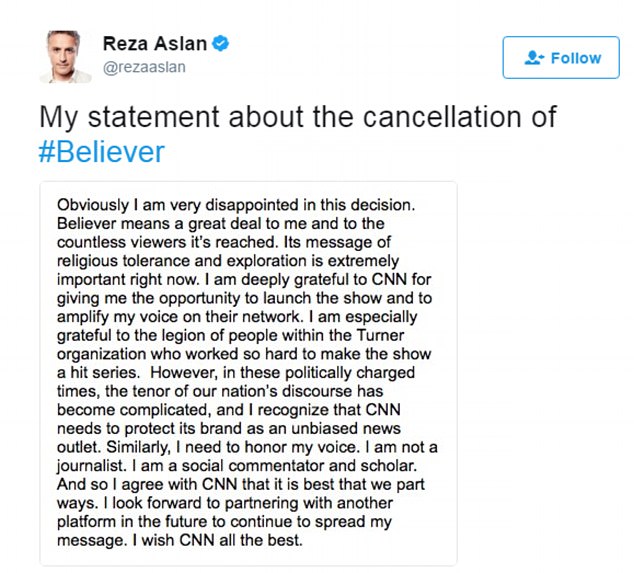