Donald Trump is taking a victory lap after the Supreme Court by a unanimous decision lifted both injunctions issued by Fake Judges.  There are exceptions.  The travel ban does not apply to people who have a relationship with a US citizen or legal resident.

‘Today’s unanimous Supreme Court decision is a clear victory for our national security,’ the president said in a statement shortly after the high court ruled. ‘It allows the travel suspension for the six terror-prone countries and the refugee suspension to become largely effective.’

The Supreme Court said it will decide in the fall whether or not the travel ban is constitutional. Liberal state attorneys general have argued that it amounts to a religious test for entry into the U.S. since the affected countries all have Muslim majorities.

The court said that while the wheels of justice turn, the Trump administration can enforce the executive order against anyone from those nations who doesn’t already have a ‘bona fide relationship’ with a U.S. citizen or legal resident.

The stopgap measure, announced Monday morning, is largely a victory for Trump, who will be allowed – at least temporarily – to stem the flow of immigrants and refugees from Iran, Libya, Somalia, Sudan, Syria and Yemen.

Trump has said he would put his ban into effect 72 hours after the Supreme Court gives him a green light.

Technically, the justices left a lower court injunction in place, but only for people whose cases mirror those of the original plaintiffs – meaning ‘foreign nationals who have a credible claim of a bona fide relationship with a person or entity in the United States.’

‘All other foreign nationals are subject to the provisions of [the executive order],’ the court ruled. 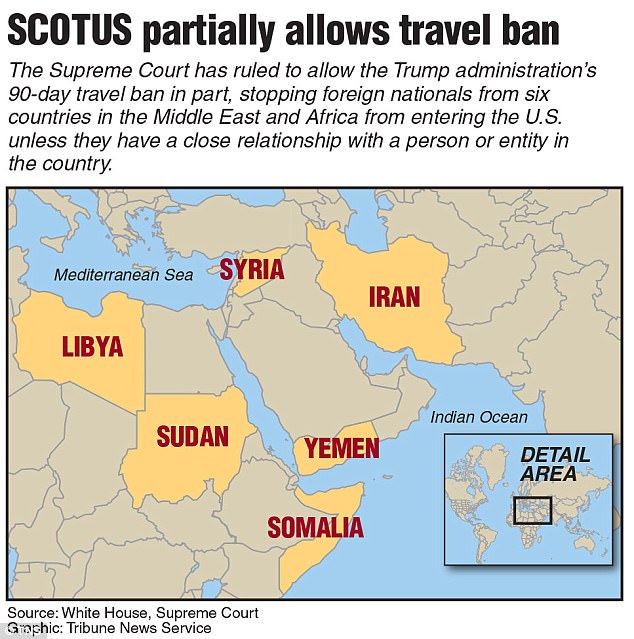