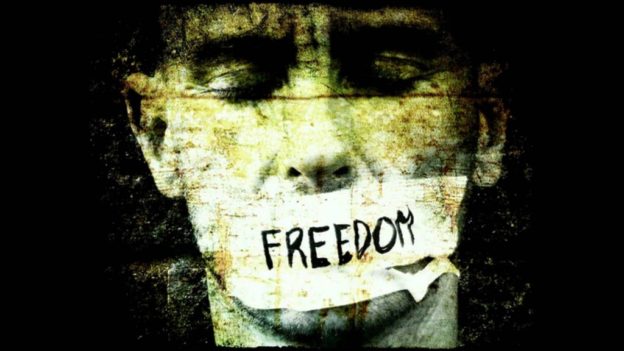 I wrote the following letter today to the Hudson, Wisconsin Star Observer following its publication of a column titled “We will not be the vehicle for hate.” Like Facebook, Google, Twitter, Media Matters for America and many other blatantly Left-biased organizations, they have decided to take a principled stand against “hate.”

Not really. Instead they are simply announcing their excuse for abandoning even paying lip service to the notion of free speech. Make no mistake about this. It is a nationwide movement to shut us all down in the interests of the extreme left and their radical Islamist allies. Read on.

I was interested to read your recent column: “We will not be the vehicle for hate.” All well and good, but I would ask, how many column inches do you give to organizations like CAIR and their representatives or other leftwing groups like the ACLU and Southern Poverty Law Center, who regularly label people they simply disagree with as “bigots,” and “Islamophobes.” Another column, by Meg Heaton, that you say “echoes our sentiments exactly,” claims others are “entitled to their opinion but not their own facts.”

Ms. Heaton is of course plagiarizing 2012 presidential candidate Mitt Romney’s words to Obama in one of their debates. It was a good, and accurate line when Romney used it. And of course it is true that no one else is entitled to their own “facts.”

But neither are you.

Your column states “we will not publish what we consider hate speech—letters that threaten or that incite crimes including violence against anyone and for any reason. Period.”

Well, good. About time a newspaper came to our defense. However, I would like to see the letters that “threaten or that incite crimes…” because all the hate and threatening behavior comes from organizations like CAIR, the SPLC and ACLU, and their extreme Left supporters. Are you going to censor them?

I, for one, have never written a column, paper, research report or book that threatens or incites crime against anyone, although since I write about inconvenient facts — not my facts, but the facts — I bet I will get censored as well. I write about facts that should concern everyone, and the effort by publications like yours to stifle them is actually what endangers our society.

First test: will you publish this column?

In my book, The Red Green Axis, I made a rough estimate of the welfare costs of refugee resettlement at $6 billion/year, while administrative costs are currently running at about $2 billion annually. I was actually low. A recent report by the Department of Health and Human Services put the cost for the past ten years at $125 billion, or $12.5 billion/year. Not my facts, the facts.

Did you read any of that? I thought not. The fact is that you don’t know what you don’t know. It would be nice if you had enough humility to admit it, though i doubt that will ever be forthcoming. But I would be happy if for once you all just did your jobs and got acquainted with the actual facts.

Yet for raising that cost issue, and attempting to quantify it, my speeches have been attacked, the venues holding them have been threatened, organizers have been threatened, their jobs threatened, and to top it off, it’s preceded or followed up by hateful, spiteful and very fact-free reporting that discredits my work. That kind of misreporting only encourages the true haters. Or how about this past year, when three paid-for events in Wisconsin and one in Minnesota were shut down by threats from Antifa because the speakers were going to talk on the subject of Islamic extremism, NOT Muslim Islamophobia.

Do you disagree that Islamic extremism is a thing? Are you living on this planet?

It is the responsibility of every lawmaker to look out for the interests of his/her constituents. Is that not a fact? Yet lawmakers all over the country are labeled “haters,” “bigots,” and “Islamophobes” for merely asking about the costs we as taxpayers must shell out for refugee resettlement and other expensive, liberal immigration programs. Is that really “hate” speech? Is that really bigoted? Isn’t it their responsibility to know these things and be involved in the decision making about how our hard-earned tax dollars are spent? No?

California has been turned into a cesspool of drugs, exotic diseases and crime as a result of its open-borders policies. Hospitals have closed because they can’t handle the onslaught. California now has an unrecoverable state debt of over $400 billion, and a combined state and local debt of $1.3 trillion. That’s as of 2015! Facts. Not my facts.

In 2014 a nationwide outbreak of enterovirus killed and crippled children and forced the closing of numerous emergency rooms throughout the nation that were overwhelmed with sickness, directly as a result of the massive influx of Central American illegal aliens, where that disease is endemic, whose children were then anonymously placed in public schools that had no choice but to accept them.

A new epidemic is now hitting our shores that affects young children. It is called acute flaccid myelitis (AFM) and it causes paralysis. The CDC reports cases in 22 states.

Is that not something we should be concerned about? No?

Journalists these days regularly engage in ad hominem attack. Instead of attacking the message — which usually contains a lot of inconvenient facts, thereby making it difficult to criticize — they attack the messenger. They claim that because this person (whoever it is) has had his columns published in such-and-such a journal, this person is automatically guilty by association.

Such tactics are cowardly, lazy, intellectually dishonest and unprincipled. We learn in Logic 101 that ad hominem is the most basic logical non-sequiter, i.e. it does not logically follow that simply because you don’t like the messenger or the outlet where the message was published, that therefore the message is somehow tainted. Facts are facts, no matter the source.

Anyone who uses ad hominem in a debate immediately loses points. Yet because you can’t argue the facts, publications like yours resort to that tactic. All the time. It is sickening and infuriating for someone like myself, who takes pride in uncovering and citing the facts, wherever they lead.

Will you cease and desist in ad hominem attacks? I doubt it.

Instead of doing your own unbiased research, mainstream publications like yours often rely on defamatory labeling provided by the Southern Poverty Law Center, a thoroughly-discredited organization that specializes in ad hominem attacks based on methodologies developed by Frankfurt School Communist Herbert Marcuse and systematized by Saul Alinsky. Did you know that? I bet not. Yet it’s a fact, not my fact. A fact. Not hate speech! Look it up!

If it instigates hate from the Left, it is because the truth strikes a chord, especially among the serially dishonest. And serial dishonesty defines the Left.

The SPLC has itself instigated real violence, as with the 2012 attack by Floyd Corkins against the Family Research Council, a mainstream Christian organization, and last year’s attack by James Hodgkinson on GOP members of Congress practicing for a baseball game. Even the Washington Post’s Dana Milbank said of SPLC’s labeling of FRC, “I disagree with the Family Research Council’s views on gays and lesbians. But it’s absurd to put the group, as the law center does, in the same category as Aryan Nations, Knights of the Ku Klux Klan, Stormfront and the Westboro Baptist Church.”

Stephen Bright of the Southern Center for Human Rights said of the SPLC’s founder, Morris Dees, “The positive contributions Dees has made to justice—most undertaken based upon calculations as to their publicity and fundraising potential—are far overshadowed by what Harper’s described as his ‘flagrantly misleading’ solicitations for money. He has raised millions upon millions of dollars with various schemes, never mentioning that he does not need the money because he has $175 million and two “poverty palace” buildings in Montgomery. He has taken advantage of naive, well-meaning people—some of moderate or low incomes—who believe his pitches and give to his $175-million operation [now close to $500 million with some sheltered in Cayman Islands accounts]. He has spent most of what they have sent him to raise still more millions, pay high salaries, and promote himself.”

I don’t follow your paper enough to know if you rely on the SPLC or not, but many do. Even if you don’t, your column smells of the same fraudulent, hypocritical self-serving tone, that rationalizes censorship of those whom you simply disagree with.

I would like to see you implement the same censorship on groups like CAIR, the SPLC, the ACLU and others, who engage regularly in intimidation tactics, defamation, lawfare, economic warfare, protests and the like, to suppress the truth, while their more extreme allies attack us in restaurants, on the streets, at our places of work and recreation, run us down in cars, shoot up nightclubs, blow up children, shoot adults at concerts and murder innocent co-workers at Christmas parties.

I ask you again, will you silence those who incite hate everywhere by calling their opponents “Islamophobes,” “haters,” “racists” and “bigots,” just because we expose them for what they are? What we do is not anti-Muslim, it is decidedly an effort to identify, on behalf of all American people, a dangerous, subversive fifth column of Islamic and radical left extremists who do not have our interests — Muslim and non-Muslim alike — at heart.