The FDA Just Delayed Moderna For A Very Serious Reason!

Margaret Hubl passed away last July at the age of 89. The Nebraska woman had mothered a large family and was confident that her familial legacy would live on. But just to make sure, she decided to reveal a huge secret during her funeral service.

Because, she never knew when she was going to pass, she had been secretly working on a project for a long time. She was a quilter and often made them for family and friends as a pastime. She even earned a few dollars on some throughout the years. 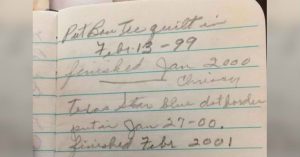 But as she knew her end was drawing near, Hubl worked doubly hard to make a series of quilts to communicate her love to her family after her passing – and she waited until her funeral service to reveal to her family…

In July after passing on, Hubl’s children and grandchildren draped all the quilts she had made over the years on the pews of the church. It made for a heartfelt tribute to the loving matriarch who had departed.

“Never did I imagine how many there were,” Hubl’s granddaughter, Christina Tollman, told TODAY. “We covered almost every single pew in that church. I never knew how many she actually made.”

The family took a series of photos of the quilted pews and shared them on social media. As you could expect, they went viral and have been shared countless times around America.

Although the quilts are pretty and colorful, it was the love and meaning that went into them that made this story soar.

Throughout her life, Hubl dedicated her life to raising her family and treating them right. This included three of her own children, and even her sister-in-law’s twins after she was lost in a tragic accident.

Hubl and her husband Henry raised all five of these children in a tiny three-bedroom home on their farm. They knew what it meant to toil. 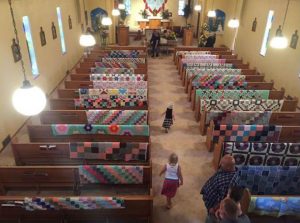 The grandmother started sewing for practical purposes. The wanted to make clothes for her children. But as they grew into adults and had their own children, Hubl continued sewing for the grandkids.

When the grandchildren started growing up, Hubl decided to sew a quilt for each of them when they graduated high school.

“She wanted us to have something to wrap up and keep warm in when we went away to school,” said Tollman.

Hubl put love and passion into each of the quilts. She really thought about who they were and what they liked when she designed the quilts.

“When we sat down to go through her things we found this — I call it a pocket notebook. Inside it says whose quilt she was working on, what day she put it in the quilt frame and which day she took it out,” explained Tollman.

As the children grew up, Hubl put more time into her quilts. Then she gave each of the grandchildren another quilt for their wedding day.

“I actually have three cousins that are not married, and the day of her funeral was the day that they got to see their quilts for the first time,” said Tollman. “That was really kind of a neat moment.”

This beloved grandmother dedicated her life and her free time to her family. And those meaningful gifts meant the world to her descendants.