International awards have been going downhill for the last dozen years or so, with people like Hillary Clinton and Barack Obama winning awards they don’t even come close to deserving.  The latest award announcement is in the vein of ridiculous.  The Sydney Peace Foundation in Australia announced Monday that it will award its 2017 peace prize to Black Lives Matter.  Say what?  This is a domestic terrorism organization.  Who was runner up?  ISIS?

The group, which is known for its peaceful and non-peaceful protests in countries around the world, including Australia, will accept the award on Nov. 2 at the city of Sydney Lecture and Award Ceremony at Sydney’s Town Hall, according to the Sydney Peace Foundation’s website.

“In 2014, Black Lives Matter emerged as a global phenomenon when the hashtag #BlackLivesMatter turned into a rallying cry for a new generation of civil rights activists and organisers. A movement swept across the United States, affirming black humanity in the face of relentless police brutality, mass incarceration and racial disparity,” the foundation stated, noting that the movement’s reach extends far beyond the U.S.

“Built and sustained by many, the Black Lives Matter Global Network (BLM) has played a vital role in growing the Movement for Black Lives, and its loud calls for justice, dignity and equality have resonated around the world,” the foundation said.

The foundation’s website said that this is the first time a group has been awarded the prize and called the decision “timely”:

Climate change is escalating fast, increasing inequality and racism are feeding divisiveness, and we are in the middle of the worst refugee crisis since World War II. Yet many establishment leaders across the world stick their heads in the sand or turn their backs on justice, fairness, and equality.
Opal Tometi, who co-founded Black Lives Matter, said the award reminds the group that it is “on a righteous path,” according to the foundation.

“Accepting this award is about our people on the ground striving for justice every single day,” Tometti said. “It’s truly meaningful to be recognized in this way. We’ll continue to push forward until structural racism is dismantled and every black life matters.

“It’s our duty in times like this to keep our eyes steadfast on the freedom we deserve,” Tometti said. 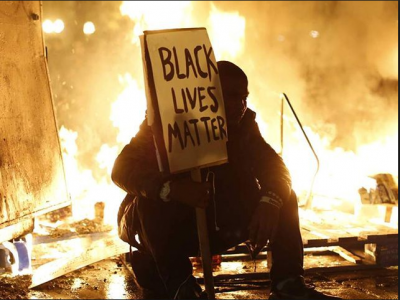