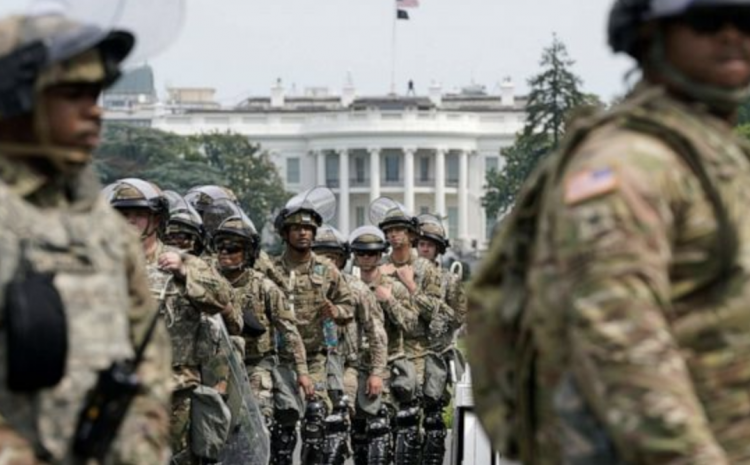 Ever since Joe Biden was sworn into the White House earlier this year, more and more people are waking up saying that he stole the election. We all know it and there is no possible way that this bumbling idiot won in a landslide over Trump and it looks like our nation’s heroes are saying the same thing too.

Over 120 retired generals and admirals have signed a letter that called out the Biden administration for stealing the 2020 election. The group that wrote the letter calls themselves the “Flag Officers 4 America” and titled their letter “Open Letter from Retired Generals and Admirals”.

And, these brave men didn’t hold back any of their punches.

One General wrote, “the FBI and Supreme Court must act swiftly when election irregularities are surfaced and not ignore them as was done in 2020”. They also blasted the Biden administration for calling voter I.D. laws racist and said “using racial terms to suppress proof of eligibility is itself a tyrannical intimidation tactic”.

Over 120 retired generals and admirals (Flag Officers 4 America) have signed an open letter that questions the results of the 2020 election as well as Biden’s mental fitness to be POTUS.

Yesterday, more than 120 former U.S. generals and admirals warned about a #Marxist take-over of the United States #Biden pic.twitter.com/Gc4rLrobiV

The Daily Mail added more to the story:

A group of more than 120 retired military officers have written to President Joe Biden to tell him his election was less than legitimate – while questioning his mental acuity.

The letter echoes former President Donald Trump’s claims of widespread election fraud – which have not been borne out in the courts – and comes on a day when Rep. Liz Cheney ripped Trump for his claim that the election was ‘stolen.’

‘Without fair and honest elections that accurately reflect the ‘will of the people’ our Constitutional Republic is lost,’ the letter from retired officers says.

The group calls itself ‘Flag Officers 4 America’ and consists of retired military officers including generals and admirals.

‘The FBI and Supreme Court must act swiftly when election irregularities are surfaced and not ignore them as was done in 2020,’ they wrote.

The letter, called an ‘Open Letter from Retired Generals and Admirals,’ was reported by Politico.

‘Today, many are calling such commonsense [voter ID] controls “racist” in an attempt to avoid having fair and honest elections. Using racial terms to suppress proof of eligibility is itself a tyrannical intimidation tactic,’ they write.

The woke crowd was absolutely triggered that these Generals spoke out against the 2020 fraudulent election.

JAW-DROPPING. DANGEROUS. DISGRACEFUL. Over 120 retired generals and admirals signed on to a letter falsely claiming the 2020 election was stolen in a move other veterans say erodes democratic norms. https://t.co/KMW5NffL4Z via @HuffPostPol

Here is more from Politico:

More than 120 retired generals and admirals are firing a major salvo in the partisan wars in the form of an open letter that accuses the Biden administration of committing “direct assaults on our fundamental rights” and pushing the uncorroborated claim that the election was stolen from Donald Trump.

The letter, mostly signed by ex-military leaders who have been out of uniform for decades, was organized by retired Maj. Gen. Joe Arbuckle and an organization called Flag Officers 4 America.

“Under a Democrat Congress and the Current Administration,” they write, “our Country has taken a hard left turn toward Socialism and a Marxist form of tyrannical government which must be countered now by electing congressional and presidential candidates who will always act to defend our Constitutional Republic.”

It also raises questions about “the mental and physical condition of the Commander in Chief.”

Among some of the more notable signatories are retired Army Brig. Gen. Don Boldoc, who is expected to run for U.S. Senate in New Hampshire; retired Army Lt. Gen. William Boykin, a former deputy undersecretary of defense for intelligence, who stirred controversy for some of his anti-Muslim views; and retired Vice Adm. John Poindexter, who was the deputy national security adviser for President Ronald Reagan convicted in the Iran-Contra Affair.

If you would like to read the full letter, here it is: