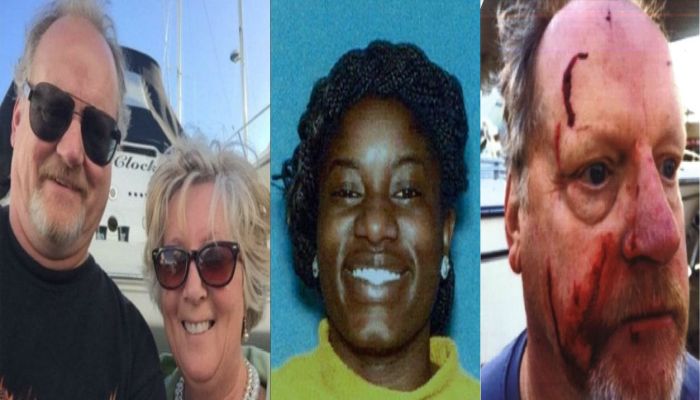 A woman reportedly used a hammer to attack a man, his car and his boat at a Virginia gas station on April 1.

Angela Jones, 26, was arrested four days later at her New Jersey residence in connection with the alleged assault at an Exxon station in Caroline County, Virginia.

She was identified by eyewitnesses and surveillance cameras on the premises.

In the parking lot of the gas station, Jones reportedly used a hammer to damage a 2016 Porsche SUV the boat it was towing.

The owner of the SUV and boat, who identified himself only as “Bob,” was clawed on the face by Jones during the incident.

Bob and his wife had stopped at the Exxon while driving back home to Massachusetts from Florida. As Bob explained, Jones started screaming at him while he was pumping gas.

“This lady was a couple pumps over and talking to me and yelling at somebody about having a message for her. I had no idea what she was talking about,” he told WTVR. “I was coming around the side of the car and next thing I know a car blocks me in. She comes out of her car gets in my face and yelling at me about some sort of message I got for her.”

Jones also allegedly told Bob that she was “sick of fancy white people,” and threatened to put a hole in his “fancy boat.”

That’s when she grabbed a hammer, explains Caroline County Sheriff Tony Lippa. “She actually took a hammer and she hit his vehicle and the boat,” Lippa alleged. “She actually clawed him. He took her down to the ground to prevent her from doing any more damage.”

After taking her to the ground, Bob explained that “I let her go and she grabbed the hammer again and hit the boat again.” At that point, the hammer reportedly broke. “That’s when she figured out she better get out of there because she didn’t have a weapon anymore,” he said.

All the while, Bob’s wife was in the Exxon bathroom. When she arrived on the scene, Jones allegedly spit in her face and called her names.

“There were some racial slurs directed at her, at which time the accused spit in her face,” Sheriff Lippa said. “According to the victim, there were racial slurs that were yelled at her before she spit at her and that’s what we’re looking into as far as it being a hate crime.”