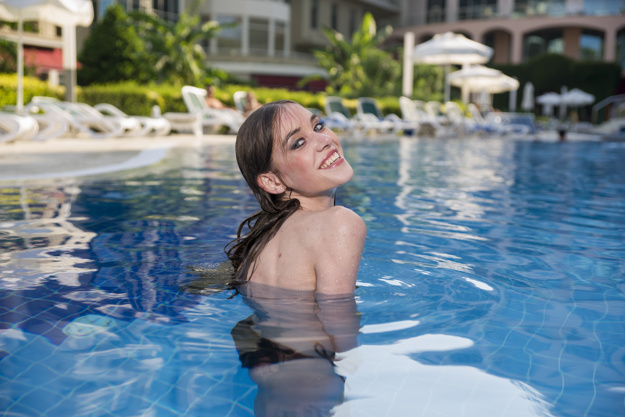 A woman claims that she was kicked out of her apartment complex’s pool over fears that her swimsuit would “excite” teenage boys who lived there.

Tyler Newman wrote on the social media network that he and fiancée Tori Jenkins were at the pool at the Smoky Crossing Apartments in Seymour when she was allegedly told to either change her suit, cover up with shorts or leave.

“Tori was accused of wearing a ‘thong bathing suit’ and told there were complaints about the way she was dressed after roughly 3 minutes tops, of us arriving there,” said Newman, adding that he and Jenkins paid a $300 maintenance fee to be able to use the pool.

Newman said that he, Jenkins and several friends were in “disbelief” over the complaints, and that his fiancé decided to go – alone – to the apartment office and “address the issue politely and calmly with the leasing consultant about the situation in a more private setting.”

“She was told that her body, because it’s built more curvy than others is ‘too inappropriate’ for children to be around,” alleged Newman. “She was told ‘there are a lot of teenage boys in this complex, and you don’t need to excite them.’ ”

“My fiancée being told she should cover up on a 90 degree day in our own apartment pool because she will ‘excite teenage boys’ is b——-,” he wrote on Facebook. “I will not stand for this. My fiancée should be able to wear a bathing suit without being sexualized and demeaned. She shouldn’t feel violated.”

Newman also claimed that the only listed pool policy regarding clothing states, “duly appropriate attire must be worn at all times. No cut offs.”

In response, the Smoky Crossing complex told local outlet WATE in a statement, “Smoky Crossing is a welcoming family community. Multiple residents within our community complained and expressed concerns regarding [Ms. Jenkins]’ swimwear.”

Smoky Crossing said that Jenkins was only asked to “wrap a towel around herself when she was walking around the pool” and “never asked to leave.”

“In addition, our leasing agent did not state that Ms. Jenkins swimwear would excite teenage boys,” the statement said. “Ms. Jenkins and Mr. Newman are valued members of our community. However, we feel it is inappropriate to equate requesting Ms. Jenkins to cover up with sexual harassment or rape culture. Smoky Crossing denounces harassment in all forms.”