There are a lot of upsides to a front-load washing machine. They’re quieter, use less water and energy per load, and you can fit more clothing in each wash for greater savings. However, there is also a potential downside if you are a parent, as a horrifying event that–they’re much easier for kids to get stuck in.

Not that a determined toddler couldn’t get into a top-loader, but that usually requires some extra climbing skills. A front-loading machine happens to sit at the perfect height for little children.

Now, a Father just shared his hilarious story about a baby in the washing machine that also could be a warning of the danger of tiny living beings in a machine.

It happens in the midst of the COVID-19 pandemic when a father had the fright of his life when he spotted his child’s face pressed against the door of the washing machine and felt like he was about to have a “heart attack,” – until he realized his wife had washed a t-shirt. It turned out that what the Dad was actually seeing was his favorite t-shirt with his child’s face printed on the t-shirt. 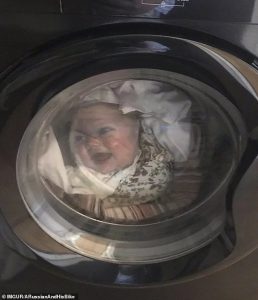 He could barely believe his eyes when he saw a shirt in the laundry machine with his baby’s face on it, leading him to believe it was actually his baby trapped in the machine.

In the caption, the father admits it took him a few seconds before realizing it was a t-shirt and not his actual child.

In the picture, it appears as though his baby’s face is pressed up against the glass, sporting a weirdly cheerful smile.

Posting to Imgur, ARussianAndHisBike shared a photo showing what exactly made him do a double take. “Please, if you are ever washing your favourite shirt with a picture of your child on it, just put a warning note on the washer or something,” he wrote, implying that he wishes his wife would have given him a heads up.

And instead of startling Imgur users, the photo attracted a string of joke titles.

With one person captioned it, ‘how else am I supposed to wash the baby, Karen?’

One person laughed and said the machine was set up properly to protect the child. “What’s the big deal? I put it on the delicate setting,” they wrote.

Others suggest the family simply turn the silly shirt inside-out the next time they have to throw it in the wash. Other also warns of the dangers, They wrote: “Co workers cat just died in a dryer accident about a week and a half ago. If you have kids or pets check before loading.” 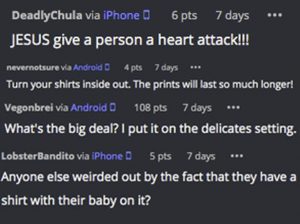 The post went viral receiving over 100,000 views in seven days.

Well, make sure that your front-loading washers are properly secured, so horrible things will be prevented from happening.