This year the elections have become greater in the minds of most Americans. Why, you ask? I’ll tell you why.

Never before has so much been at stake or on the line, for Americans, in general. The SCOTUS  is a very important thing to take into consideration. 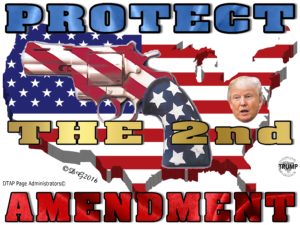 Keep in mind that whoever becomes POTUS is going to elect quite a few new supreme court justices. There is one slot open but many existing justices are now very old.  This is no laughing matter.

If your second amendment rights mean anything to you, well, take notice. Do you want to be able to defend yourself in your own home? Are you able to defend your family? A gun in the right hands can make the difference between your life and the lives of your family or the life of a criminal.

Late term abortions are allowed, under a Clinton presidency, up to the day of birth.  A baby who is healthy and can survive even an induced pregnancy, can survive and be adopted,  is doomed to die under this woman.  Roe VS Wade will continue,  no exceptions will be made.

A Clinton presidency will never guarantee your rights as citizens to defend yourselves.

Trump has been endorsed by the NRA. The NRA believes that a Trump presidency will allow gun owners their rights under the constitution of the United States of America.

Abortion laws will be amended under Trump president. Trump is pro-life. A full term baby or a baby who can survive will not die on a cold table if Trump is elected.

I have come across many Democrats in my day.  I understand that they have been voting the same way from the first day they were able to vote.

Things have changed in this country.  Our way of life is no longer the same as it used to be.  A vote is no longer just a vote.  A vote by an American is now voting for the future of America.

My voice will be heard.  I hope that Americans will want to be heard.  I have faith in the people of the United States of America to do the right thing when they cast their ballot.

People are not born bad. People live and learn.  I have and become a better person through what I have seen and experienced.  I believe in the American way of life.  Americans are generally good people and will not fail the dream of what America is as a nation.

I believe that what America needs now is an non-politician.  We deserve better than what we have received. Don’t vote for the same old, same old.  Let’s give all Americans what we really deserve, honesty and the real American dream.

Hello, I ham an author of over 17 books. I say 'over' because I wrote 17 by myself but have also contributed to many more books for charity. I enjoy writing about politics, so, I write articles. I can be found easily on the Internet. There is always more about me on my personal website http://davedagruber.com. I produced videos on Youtube and have my own channel under my name. I own http://publishingwithpassion.com and http://poetrywithpassion.com. I also do graphic art design. Politics is my real passion, though. I enjoy research and putting my own flare on some subjects.