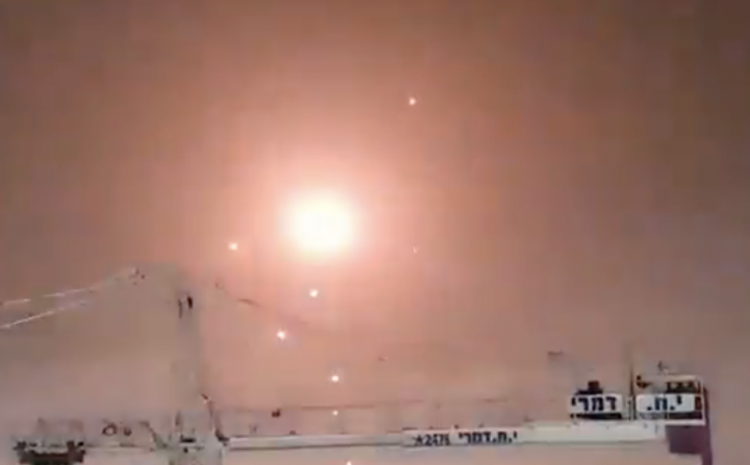 It didn’t take long for the middle east to explode into chaos after Joe Biden stepped into the White House at all. After years of peace in the region with Trump in charge, Biden has come in and poked the hornet’s nest.

Not only did Trump essentially bring some sort of world peace, but he also obliterated ISIS and was able to maintain law and order on a world stage.

Compare that to how things are going now that Biden is in charge. The terrorist groups are gathering again and going back to their old ways which have Israel smack dab in the middle of it all.

Over the last 36 hours or so, 400 rockets have been launched at Israel, and Biden has done nothing to stop it.

Now, if Trump were in office, and had done the same thing the lamestream media would have called his inaction a  “failure” of his foreign policy.

However, with Biden in office, the media is hardly covering any of it.

Fortunately, the Israeli missile defense system (named “Iron Dome”) has intercepted most of the missiles.

Take a look at this incredible footage:

The #IronDome is truly a life saver! This is the Iron Dome in action tonight, as rockets are fired at southern #Israel from #Gaza! pic.twitter.com/y4HCyaTntK

INTERCEPTED:
Terrorists recently fired another barrage of rockets from Gaza toward the Israeli city of Ashkelon.

We intercepted the rockets with the Iron Dome Aerial Defense System, and are now striking Hamas terror targets. pic.twitter.com/5i87BRAgDn

Massive number of interceptions above Ashdod by Iron Dome pic.twitter.com/4RJjmALz0Y

Sadly, it appears that the Iron Dome is being overwhelmed.

So many rockets are being launched that the Iron Dome is unable to keep up.

At this time, 2 Israelis have died and an additional 28 people have died in Gaza.

The Associated Press confirms this news:

A confrontation between Israel and Hamas sparked by weeks of tensions in contested Jerusalem escalated Tuesday. Israel unleashed new airstrikes on Gaza, killing a number of militants and civilians, while militants barraged southern Israel with hundreds of rockets, killing two Israelis.

The barrage of rockets leaving Gaza and airstrikes coming into the territory continued almost non-stop throughout the day, in what appeared to be some of the most intense fighting between Israel and Hamas since their 2014 war. The fire was so relentless that Israel’s Iron Dome rocket-defense system seemed to be overwhelmed. Meanwhile, columns of smoke rose from many places in Gaza.

Since sundown Monday, 28 Palestinians — including 10 children and a woman— were killed in Gaza, most by airstrikes, health officials there said. The Israeli military said at least 16 of the dead were militants.

Two women were killed by rockets fired from Gaza that hit their homes in the southern city of Ashkelon — the first Israeli deaths in the current violence. At least 10 other Israelis have been wounded since Monday evening.

After those deaths, Israeli Prime Minister Benjamin Netanyahu said officials decided to “increase both the strength and rate of the strikes” against militant groups Hamas and Islamic Jihad in the Gaza Strip.

Egypt was trying to broker a cease-fire, but the cycle of violence was gaining momentum. Even before the two Israeli deaths, the Israeli military said it was sending troop reinforcements to the Gaza border and the defense minister ordered the mobilization of 5,000 reserve soldiers.

Lt. Col. Jonathan Conricus, a military spokesman, told reporters that Israel was beefing up defensive forces on the border to prevent possible infiltrations and increasing its offensive forces as well, primarily in the air.

He said the objective was to send a “clear message” to Hamas.

The barrage of rockets and airstrikes was preceded by hours of clashes Monday between Palestinians and Israeli security forces, including dramatic confrontations at Jerusalem’s Al-Aqsa Mosque compound, a sacred site to both Jews and Muslims. The current violence, like previous rounds, including the last intifada, or uprising, has been fueled by conflicting claims over Jerusalem, which is at the emotional core of the long conflict.

For any reasonable individual, it is clear that Israel is the one being attacked here, but the anti-semites in the Democrat party are showing their true colors once again.

Take for example, “the squad” and their hateful rhetoric.

Ilhan Omar Says It’s an ‘Act of Terrorism’ For Israel to Defend Itself Against Hamas Rockets https://t.co/77tOKW1CjO

We stand in solidarity with the Palestinian residents of Sheikh Jarrah in East Jerusalem. Israeli forces are forcing families from their homes during Ramadan and inflicting violence.

It is inhumane and the US must show leadership in safeguarding the human rights of Palestinians.

#Jihad DuJour: #LindaSarsour, a favorite friend of #Squad jihadis #IlhanOmar & #RashidaTlaib says, “Our #1 top priority is to protect& defend our community…NOT to assimilate…and to please Allah & only Allah.”#AmericaFirst#LoveItOrLeaveIt#BanShariapic.twitter.com/roFH4fftfR

In other words, Democrats and the Squad believe that it is a crime for Israel to defend itself.

It is clear that Israel is being attacked.

Yet Democrats don’t want Israel to fight back.

Thank goodness the Israelis at least have the Iron Dome.

Members of the progressive “Squad” are coming out to accuse Israel of “terrorism” and calling for a shift in US policy toward the Jewish state — as tensions in the region reignite and Defense Forces respond to Palestinian militants showering hundreds of rockets over Israeli cities, including Jerusalem.

Rep. Ilhan Omar (D-Minn.) blasted Israel for committing an “act of terrorism” by launching air strikes into the Gaza Strip after Hamas and other Islamic jihadist militants bombarded multiple locations in Israel with rockets.

“Israeli air strikes killing civilians in Gaza is an act of terrorism. Palestinians deserve protection. Unlike Israel, missile defense programs, such as Iron Dome, don’t exist to protect Palestinian civilians. It’s unconscionable to not condemn these attacks on the week of Eid,” she tweeted on Monday.

Omar’s tweet came shortly after the The Gaza Ministry of Health announced the airstrikes led to 20 fatalities — with Israel announcing at least 16 were militants, according to ABC News.

Hamas — which is designated as a terrorist organization by the United States — said it launched the attacks into Israel in response to “crimes and aggression” following an escalation in tensions in recent weeks over an eviction plan in east Jerusalem’s Sheikh Jarrah neighborhood.

Rep. Rashida Tlaib (D-Mich.), who is of Palestinian descent, called on Congress to “condition the aid we send to Israel, and end it altogether if those conditions are not followed.”

“American taxpayer money is being used to commit human rights violations. Congress must condition the aid we send to Israel, and end it altogether if those conditions are not followed. Statements aren’t working @SecBlinken. Enough is enough,” she tweeted.

Rep. Ayanna Pressley (D-Mass.) chimed in, announcing her support for Palestinians and jabbing Israel amid the tension.

“I stand in solidarity with the Palestinian residents of Sheikh Jarrah in East Jerusalem who are being forcibly removed from their homes — in the middle of a pandemic, during Ramadan. This is unacceptable,” the Massachusetts pol wrote.

This is exactly why we need Trump back in office and we need him sooner rather than later.

If we leave it to Biden the whole world will descend into chaos since he doesn’t know his own head from his ass. This is just what the liberals want and we need to stand against it and pray that Trump is reinstated now.