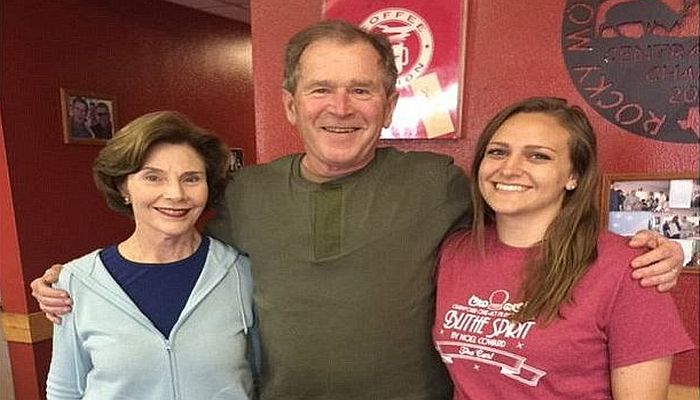 A waitress is faced major backlash after sharing a photo of herself with former president George W. Bush and his wife Laura along with a caption some have called “insensitive” and “stupid.”

Leisa Smith tweeted a photo of herself with George W. Bush and the former first lady after she served them at the restaurant where she works and captioned it, “Bush did 911 but he did me a solid and left me a hella tip #.”

According to Leisa, the former president left her a $40 tip on his $21 bill.

“I hope you work there till you 70 lol. You ain’t ready for the real world!” one user wrote, said Daily Mail.

“You gladly take his money and then dog him on social media? So disrespectful and uneducated,” another user wrote. ”I hope you grow up and learn. Good luck.”

Mic reached out to Leisa for comment and she said that “Bush did 911” comes from a meme she and her friends use. She said she only intended for a few friends to see the tweet and that she thought it would be funny.

The “Bush did 911” meme originated during an interview with Charlie Sheen in 2006, according to Mic. Since then, many on the internet use the meme to make fun of conspiracy theorists who believe the Bush administration was responsible for the Sept. 11, 2001 terrorist attacks.

“I have a couple of friends that use the meme a lot and they were the only ones I was expecting to see the tweet,” Leisa told Mic. “I was just trying to get a laugh out of my friends but I in no way actually believe the conspiracy.”

Leisa tweeted a follow up to clarify her comments, in which she said Bush and his wife “were the nicest people I have ever met and had I known the tweet would blow out of proportion like this I would have never tweeted.”