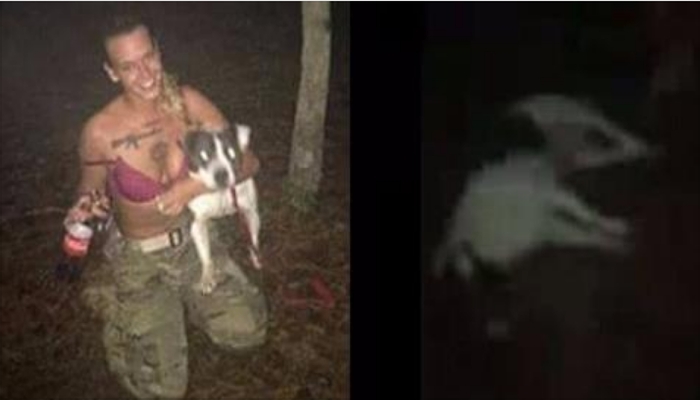 A veteran from Fayetteville, North Carolina is accused of tying her service dog to a tree in the woods and shooting him five times while her soldier boyfriend filmed it.

Marianna Rollins, 23, and Jarren Heng, 25, have each been charged with cruelty to animals and conspiracy, reports the Fayetteville Observer.

On April 17, Rollins posted on Facebook that she found a new home for her PTSD therapy dog, Cam. But authorities say she and Heng executed the dog instead.

“They can be heard on the tape laughing and giggling as the dog was being killed,” Cumberland County District Attorney Clark Reaves said at the couple’s first court appearance on April 25.

Rollins’ husband adopted Cam from the Cumberland County Animal Shelter in January of 2016, shortly after the couple separated. He was attracted by the shelter’s adoption ad: “Please someone show this boy what a real loving forever home is. He is super-friendly, very sweet, calm and loving. He just wants someone to love him and give him a chance.” At the time, the dog’s name was “Huey.”

The husband, who requested anonymity due to threats against his wife, described Huey as a “great” dog who once prevented his house from being robbed. “Huey jumped off the bed and barked,” he explained. “Huey scared them and saved the day.”

When he was assigned to South Korea with his Army unit, he said Rollins begged to keep the dog, so he let her. It is a decision that he now regrets.

While he was overseas, Rollins changed Huey’s name to Camboui, or “Cam” for short. She got the dog certified as an emotional support animal for post-traumatic stress disorder, which is one of her mental health issues, according to friends.

Rollins joined the Army in February of 2014, and medically retired January of 2017, according to court documents.

Heng is a soldier in a unit that reports to the Army Special Operations Command, according to Lt. Col. Robert Bockholt, notes the Daily Mail.

In April, Rollins began posting on Facebook in attempt to find Cam a new home, saying that he was too expensive to care for anymore. On April 17, she posted an update: “Sad he has to go, but he will be much happier where he is heading off to.”

“He’s going to have such a great new life,” Heng replied, punctuated with a smiley-face emoji.

Then they took Cam to an unknown wooded area and filmed themselves shooting him to death, dragging his dead body around, and dumping it in a shallow grave, according to court documents.