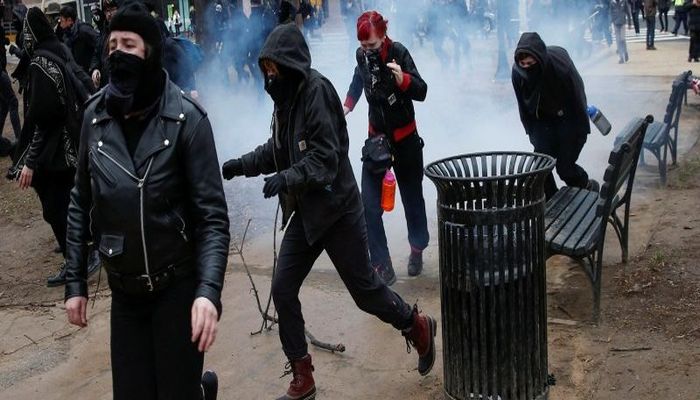 Women around the world put on their pussy hats and marched around this weekend to tell Donald Trump to keep his tiny hands away from their genitalia.

The non-violent Women’s March drew in hundreds of thousands of participants in America alone and hyped as a major world-historical event by the press, in spite of its lack of a coherent message excpet for “we hate Trump.” Many saw it as a sign of the coming age of progressive activism that will ultimately bring down Trump.

However, other left-wing demonstrations may prove to be better indicators of what’s to come in Trump’s America than the pink hat ladies walking around with ridiculous signs. That’s the prospect of left-wing political violence becoming both common and morally justified in the United States.

During Trump’s inauguration Friday, anarchists ran wild in downtown D.C., smashing store front windows and setting trashcans and a limo on fire. These actions were roundly condemned by several liberals and most of the Left was in agreement that the destruction was not to be tolerated. But there was one violent act of the black bloc anarchists liberals were ecstatic over.

White nationalist and alt-right coiner Richard Spencer was giving a TV interview right near the chaos unfolding in D.C. on Friday. Right in the middle of it, an anarchist punched him in the face, and the the video of it became a viral sensation.

The respectable Left couldn’t get enough of it.

I don’t care how many different songs you set Richard Spencer being punched to, I’ll laugh at every one.

I have typed and deleted at least 5000 responses https://t.co/sD4veFc4aW

waaaa i got punched and the cops didnt bring me cocoa and my teddy waaaaa pic.twitter.com/NKnjZdtMWg

If we make Nazi punching a social media challenge for white teens on FB, we might just speed this whole thing up.

The euphoria over Spencer’s punch prompted The New York Times to publish an article entitled, “Attack on Alt-Right Leader Has Internet Asking: Is It O.K. to Punch a Nazi?” The piece admitted “[t]here was little substantive debate online about the ethics of punching Mr. Spencer,” because it all occurred on Twitter. People, of course, answered in the affirmative on Twitter that it is perfectly right to punch a Nazi in response to the article.

I believe in non-violence.
But in a just war, we have a different obligation.
We are now in a just war.https://t.co/twMPMtfsUR

A more in-depth argument for why it’s okay to punch fascists came from British comic book writer Warren Ellis. Ellis believes it is always correct to punch Nazis — and you shouldn’t just stop there.

“[Nazis] lost the right to not be punched in the face when they started spouting genocidal ideologies that in living memory killed millions upon millions of people. And anyone who stands up and respectfully applauds their perfect right to say these things should probably also be punched, because they are clearly surplus to human requirements,” Ellis wrote in his newsletter.

That argument was widely praised on social media, even though it expanded who you should punch to basically anyone who stands up for free speech. Not surprising for a comic book guy to have such a childish view, but it is for respectable liberals who tweeted out their support of it.

The problem with all this cheering of violence towards a political opponent is that gives encouragement to any individual who wants to attack anyone they see as a “Nazi” to do so. There’s already an example of this mentality going very wrong.

Breitbart Tech editor Milo Yiannopoulos spoke at the University of Washington last weekend amid tumultuous protests at his presence. Yiannopoulos is frequently called an alt-right nationalist by mainstream publications and liberals, even though he is certainly not one.

Outside of his event, a man was shot in the middle of the raucous anti-Milo demonstration. But no Milo supporters were involved in the altercation.

The person shot was actually an anti-fascist protester, and the non-white shooter attacked him because he thought his victim was a Nazi. The man who suffered a life-threatening gunshot wound voted for Bernie Sanders, has an anti-Nazi tattoo and was at the event to express his disgust for Yiannopoulos.

However, that evidence appears to have been discarded by police who decided to not press charges against the shooter because he claimed the man he shot was a “white supremacist.”

This shows the dangerous slippery slope you embark upon when you say it’s morally justifiable to attack Nazis. Considering the pervasive arguments that Trump, his advisers and even all of his supporters are fascists, this opens up the possibility that it’s perfectly fine to assault anyone on the political Right.

Anti-Trump violence was justified on similar grounds when the future president held rallies that were disrupted by riots and attacks on his supporters.

Since calling anyone you disagree a Nazi is very common in our political discourse, who would be subject to attack could be endless. Hell, if you really agree Jonah Goldberg’s famous book “Liberal Fascism,” conservatives could justify their attacks on liberals because they’re the “real Nazis.”

But, of course, very few people would defend a conservative doing such a thing because the institutions that increasingly determine what’s morally good — the media, entertainment, academia, even several churches — in our society are dominated by the Left. Everyone would condemn the Trump supporter who would punch a liberal in the face because he thought he was a Nazi.

Not so much if it was the other way around, as we’ve seen with last weekend’s events.

When the Trump administration starts to implement its most controversial policies — such as increasing the number of deportations of illegal immigrants — it’s likely that the demonstrations against such actions will resemble the violence of the anarchists rather than that of the pussy hat brigades.

And instead of smashing the windows of progressive-friendly businesses like Starbucks, the leftists could direct their energy towards hunting down anyone they deem a “Nazi.”

That’s a great way of turning America into the Weimarian nightmare the Left dreads to see again.