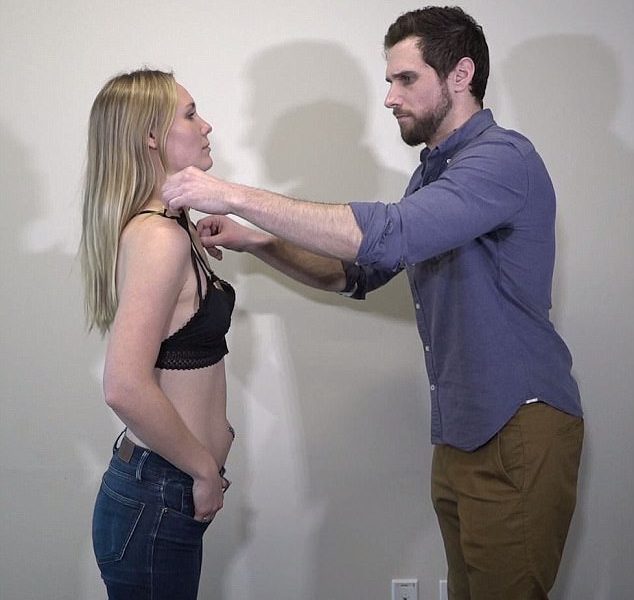 For generations men have struggled with the average bra until the women get tired of waiting and do it themselves.  So, what do you suppose men would do if they had to contend with modern designer bras with hidden fasteners?  One man stopped in the middle of his attempt and asked the moderator for one of his lifelines.

From bras to bralettes and everything in between, women’s undergarments have gone from a few basic hooks to far more complicated closures — and men are struggling to keep up.

Daily Mail Online asked three brave guys to try and figure out how to take five very complicated-looking bras off of a model, who has trouble hiding her amusement during filming.

And while men may like to see women wearing the unusual bras, the video proves that many of them have no clue how to remove them when put to the test.

For round one, the guys come face to face with a crochet lace nigh-neck bra from Victoria’s Secret that unhooks on both the back and neck.

James is clearly flummoxed by the sexy bra, and when he first sees it, he notes ‘it’s so open in the middle’.
‘Is that where you…?’ he asks, unable to even finish his question.

After inspecting the bra from the front and the back, he thinks he’s figured it out and starts to take it off the model.
‘I think… Yep, that just slides off. Cool,’ he says as he completes the task.

Alex is overly confident from the get-go, explaining he is ‘familiar with these’.

‘Boom!’ he says, but his sense of victory doesn’t last long. ‘Oh, there’s another hook? Oh my goodness, a trick hook.’
And Rob just look at the bra on the model and says: ‘Oh man.’

Next up is Victoria’s Secret’s lace and mesh scoop-neck bralette, which ties on the back and needs to be pulled over the head, and the guys are immediately intimidated by the ties.

‘Alright, so no front latch here. Very revealing,’ Rob says before trying to take it off. ‘I think that’s it. Did I get it? No? S**t.’
Rob finally deduces that the bra must come over the models head to be removed after he unties the straps in the back.