A decal placed on the back of a pickup truck has caused an uproar among many who say that it is insensitive.

The decal, which was placed on the back of a pickup truck and was photographed by an offended citizen, is not new. In recent years, pictures of trucks with the very same decal have gone viral online, but after the picture was snapped in Leeds, people have been voicing their disgust. 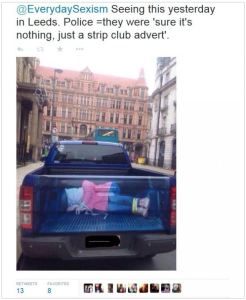 The decal is an optical illusion made to look like a woman is bound and gagged in the back of a truck, and while some may find it funny or clever, others think that there’s nothing cute about it.

“Making a joke out of this imagery is proliferating this violence against women and making it acceptable. We mustn’t play down the seriousness of it,” said Jo, a member of the campaign fighting to get the decal banned and a former kidnapping victim herself.

“I do not want to be witnessing this when I have been kidnapped and held hostage in a caravan for several days. I thought – what if my daughter had seen it?” said Jo to Metro UK. “I personally think that is worse because you are combining incitement to kidnap with sexual arousal. It makes the whole thing so much more sinister.”