As most of the northern hemisphere moves into its coldest period of the year, heating systems are being turned on and in many cases space heaters are being pulled out of storage. As firefighters claim, these items should never be plugged into a power strip.

Fire District #1 of Umatilla County, Oregon, reminded everyone that when it gets cold outside this winter, make sure not to plug your space heater into a power strip.

Firefighters are emphasizing the importance of one electricity safety tip.

“You should never plug a heater into a power strip,” Umatilla County Fire Department warned. “These units are not designed to handle the high current flow needed for a space heater and can overheat or even catch fire due to the added energy flow.”

A second warning came after a house fire was caused by a space heater, reports said. The heater ignited a sofa, authorities said.

They went on to explain: “This is an image from our fire station when a surge protector was misused. Even the firefighters need a lesson. The point comes down to proper use. Even the best equipment can fail if not used correctly. No one manufacture is at fault, yet it’s all about the end users ability to use the product safely.” 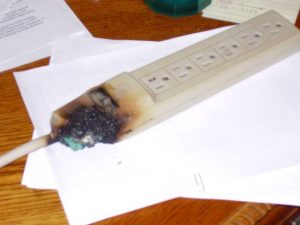 The danger lies in a common misconception: Most people don’t realize that a power strip doesn’t limit or block surges as a surge protector does, explains Rachel Rothman, Chief Technologist at the Good Housekeeping Institute. Plus, many space heaters have specific manufacturer’s instructions, like only plugging them directly into a wall outlet.

“You should definitely not use an extension cord or power strip, which could easily overheat,” Rothman adds. “And you really shouldn’t plug any other electrical devices into the same outlet as the heater for safety reasons.”

Folks online immediately shared this warning released by the fire department as a good precaution for everyone:

“I had a household one catch on fire years ago,” one Facebook user said. “Good thing I woke up.”

“I never knew this,” another commented.

Shortly after the warning came out from Oregon, the Toledo Fire Department in Ohio issued a warning after they put out a fire caused by a space heater at 3 am. The flames burst forth after the heater ignited a sofa in the home.

“If you are operating them, make sure you’re operating them in a safe manner,” Sterling Rahe, public information officer with the Toledo Fire Department, told CBS affiliate WTOL. “Make sure there’s a space at least a minimum of three feet around that space heater.”

“A lot of these fires, kind of have a common theme,” said Rahe. “Things were left unattended.”