White offenders convicted of a crime carrying a mandatory minimum sentence are receiving more severe punishments than any other race, according to a United States Sentencing Commission (USSC) study.

The USSC released its comprehensive review of the federal justice system’s mandatory minimum penalties Tuesday in its first review of the penalties since 2011. The study found that unlike 2011, white offenders, as opposed to black offenders, had the highest average sentence among offenders convicted of a crime carrying a mandatory minimum penalty. White people also had the highest sentences among offenders who had obtained sentence reductions.

Despite the raised sentences for whites, USSC reported a drop in the rate at which mandatory minimum sentences are used since 2011. The study clarifies that the drop is likely due to policies adopted by the Obama administration during the later years of Barack Obama’s presidency.

In September 2016, more than 55 percent of inmates in federal custody had been charged with a crime carrying a mandatory minimum sentence. These inmates had an average sentence of 110 months or just over 9 years. 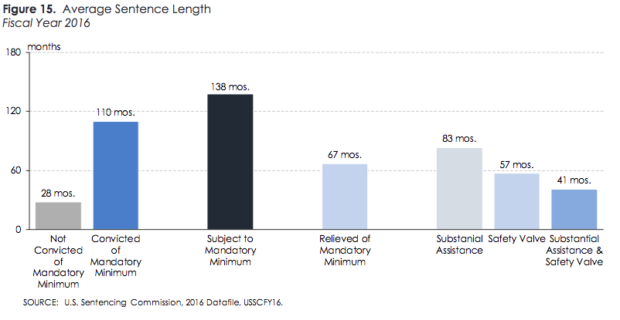 Mandatory minimum sentences have been at the center of ongoing criminal justice reform battles between bipartisan groups and Attorney General Jeff Sessions, who has pushed hard for his “tough-on-crime” mandatory minimums.

Before Sessions’ appointment, Republicans and Democrats had largely agreed to move away from mandatory minimum sentences toward policies aimed at reducing recidivism such as treatment, rather than prison time, for non-violent drug offenders.

Since Sessions’ appointment, however, virtually the only “tough-on-crime” policy enacted, passed, or adopted since the Trump administration arrived came from an order Sessions made, mandating that DOJ prosecutors pursue the most severe sentencing possible.

Many states across the country have shirked the policy push as well, opting to move forward with soft-sentencing reform.

The Republican-controlled Louisiana House passed a massive 10-bill criminal justice reform package in May to decrease the state’s prison population by 10 percent over the next decade.

Republican Gov. Bruce Rauner signed a bail reform measure in Illinois in June to get more people out of jails. While Republican Gov. Mary Fallin signed SB 603 the same month to reduce Oklahoma’s recidivism rate by matching restitution payments to an inmate’s ability to pay.