Snopes’ owner David Mikkelson started a crowd-funding website.  He told the fans of Snopes they are almost out of business but for some strange reason, he never told them why.   Mikkelson started Snopes with his former wife Barbara in the 1990s and at that time they were trying to debunk urban legends and the such.  They now exist to further urban legends.  They are well known for their deceit and lies and partisan fact checking.

The crowd funding raised a half a million dollars on the first day, but I wonder how many would have contributed had they known the reason why Snopes needed the money so badly.  You see,  David Mikkelson charged prostitutes and escorts to Snopes as well as his wedding to Elyssa Young, an escort he met through the use of her services.

Eryn O’Bryn is the stage name for Elyssa Young that she used when offering her personal services.  Her webpage is still operating and offers her  ‘courtesan’ (Hooker) to anyone with the proper funds.  Mikkelson’s partner, Proper Media is accusing him of charging his wedding to Snopes. (I hear that now they are married, Young now gives him a 50% discount)

Proper Media claims that over the past year Mikkelson ‘engaged in a lengthy scheme of concealment and subterfuge to gain control of the company and to drain its profits.’

Mikkelson counters that Proper Media – which Snopes also contracts for advertising work – has been holding the website ‘hostage’ by ‘withholding advertising revenue.’

In a plea for donations this week, the Snopes founder said the website ‘is in danger of closing its doors’ due to Proper Media allegedly refusing to turn over ad income or relinquish its control of advertising on the website.

‘Our legal team is fighting hard for us, but, having been cut off from all revenue, we are facing the prospect of having no financial means to continue operating the site and paying our staff (not to mention covering our legal fees) in the meanwhile,’ said Mikkelson. 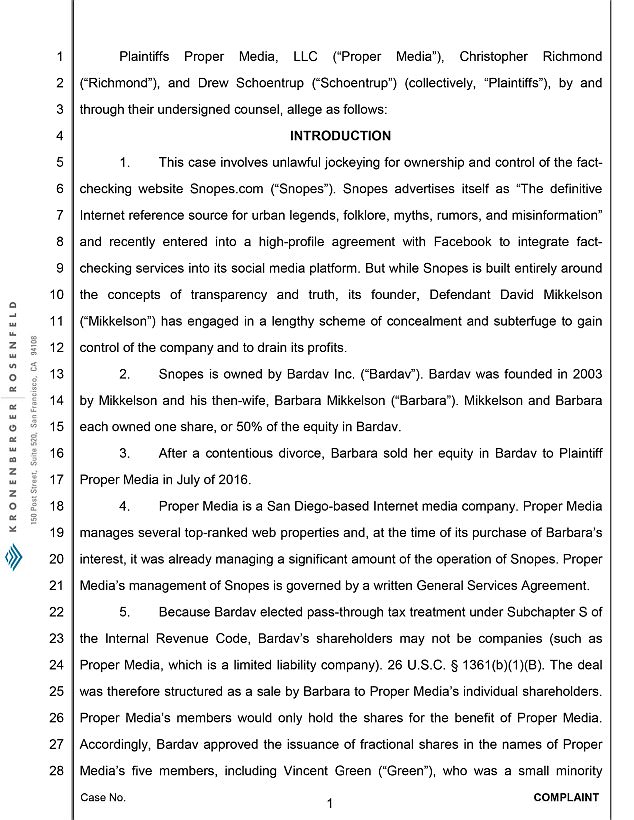 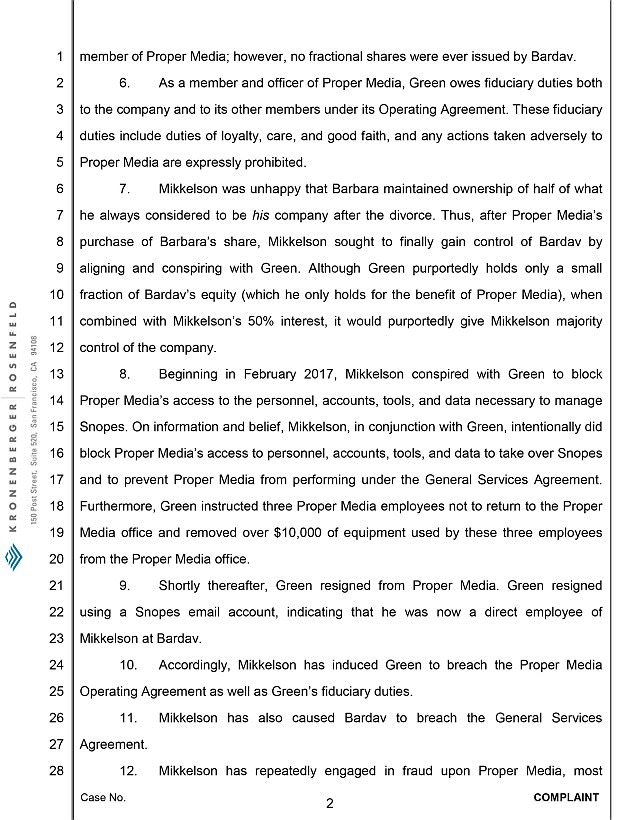 But Proper Media insists that Mikkelson’s personal spending and mismanagement is to blame for Snopes’s money woes.

In legal papers filed in San Diego Superior Court, they say: ‘But while Snopes is built entirely around the concepts of transparency and truth, its founder, Defendant David Mikkelson (‘Mikkelson’) has engaged in a lengthy scheme of concealment and subterfuge to gain control of the company and to drain its profits.’

The company says Mikkelson unilaterally broke the advertising contract earlier this year and has bristled at shareholder efforts to rein in his spending.

They note that even as Mikkelson claimed to be under financial duress in court filings in June, he signed the documents while on a trip to Orleans, France.

‘If Mikkelson is permitted to continue unabated as a director of Bardav, he will irreversibly drain the company of important financial resources through personal and unnecessary expenditures,’ said Proper Media in the lawsuit.

The company also claims Mikkelson carried out ‘pervasive fraud’ at Snopes and used the accounts to pay for lavish trips and personal items while refusing requests from shareholders to examine his expenditures.

According to the lawsuit, Mikkelson spent ‘tens of thousands of dollars’ from the company on legal fees for his acrimonious divorce from Barbara last year, a drawn-out battle that included disputes over Mikkelson’s salary and alleged spending on prostitutes.

Court documents from their divorce and its aftermath revealed that he wanted to be paid $720,000 a year.

He is also accused of spending ‘tens of thousands of dollars’ on personal trips, including a honeymoon with his new wife to Tokyo Disneyland.

The lawsuit claims Mikkelson spent money on Young, who he married last year.

Young was an escort in Las Vegas up until at least 2015 and charged $500 per hour, according to her website.

Fact check that you leftist bastards.