While dogs are preferred pets for people in different parts of the world, they have also been the target of disturbing crimes against animals. Shocking incidents of canines being assaulted and animals being raped have been reported in the past few years.

A dog raped by a perverted couple in Colorado has been put down after his traumatic experience left him too aggressive for safe adoption, an animal shelter says.

Bubba, an Akita-mix breed, was sexually abused by his owner, Frederick Manzanares, on a customized bench built to facilitate sex acts with the dog, according to an arrest affidavit. While his owner was sentenced to six months in jail, Bubba the dog paid the ultimate price of death.

According to the Denver Post, the staff at the Aurora Animal Services Division determined Bubba could not be safely adopted. The dog became aggressive after Manzanares surrendered him in July as he and his girlfriend Janette Solano, were being prosecuted for using the dog for sex.

An investigation began in April when the Aurora Police Department was notified concerning a domestic dispute. When authorities met Solana at a nearby gas station, she told the police officer she and Manzanares had an argument, and he had been pressuring her to have sex with their Akita mix dog named Bubba. Manzanares had been researching bestiality and insisted Solana keep an open mind.

Manzanares built a customized bench with padding to facilitate the sex acts with Bubba including spraying a hormone on the dog to arouse him. Police seized photos and videos of the couple and the dog having sex. Solano told police she had become “somewhat jealous” of her boyfriend’s relationship with the dog.

In addition to six months in jail, Manzanares, 51, will be on probation for two years after pleading guilty to two counts of misdemeanor animal cruelty. Solano received a deferred sentence for a single count of animal cruelty. 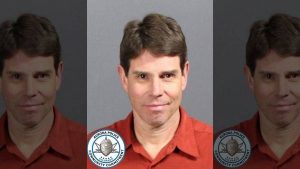 The mug shot of Manzanares shows it all. The dog’s attacker has a twisted look on his face as if he was almost proud to have been caught violating the dog alongside his girlfriend. However, the damage that was done to the dog was irreparable.