Parents, taxpayers and donors have little idea of the levels of lunacy, evil and lawlessness that have become features of many of today’s institutions of higher learning.

Parents, taxpayers and donors who ignore or are too lazy to find out what goes on in the name of higher education are nearly as complicit as the professors and administrators who promote or sanction the lunacy, evil and lawlessness.

As for the term “institutions of higher learning,” we might start asking: Higher than what? Let’s look at a tiny sample of academic lunacy.

During a campus debate, Purdue University professor David Sanders argued that a logical extension of pro-lifers’ belief that fetuses are human beings is that pictures of “a butt-naked body of a child” are child pornography. Clemson University’s chief diversity officer, Lee Gill, who’s paid $185,000 a year to promote inclusion, provided a lesson claiming that to expect certain people to be on time is racist.

To reduce angst among snowflakes in its student body, the University of California, Hastings College of the Law has added a “Chill Zone.” The Chill Zone, located in its library, has, just as most nursery schools have, mats for naps and beanbag chairs. Before or after a snooze, students can also use the space to do a bit of yoga or meditate. The University of Michigan Law School helped its students weather their Trump derangement syndrome — a condition resulting from Donald Trump’s election — by enlisting the services of an “embedded psychologist” in a room full of bubbles and play dough.

To reduce pressure on law students, Joshua M. Silverstein, a law professor at the University of Arkansas at Little Rock, thinks that “every American law school ought to substantially eliminate C grades and set its good academic standing grade point average at the B- level.”

Today’s academic climate might be described as a mixture of infantilism, kindergarten and totalitarianism. The radicals, draft dodgers and hippies of the 1960s who are now college administrators and professors are responsible for today’s academic climate. The infantilism should not be tolerated, but more important for the future of our nation are the totalitarianism and the hate-America lessons being taught at many of the nation’s colleges.

For example, led by its student government leader, the University of California, Irvine’s student body voted for a motion, which the faculty approved, directing that the American flag not be on display because it makes some students uncomfortable and creates an unsafe, hostile environment. The flag is a symbol of hate speech, according to the student government leader. He said that the U.S. flag is just as offensive as Nazi and Islamic State flags and that the U.S. is the world’s most evil nation.

“The idea of freedom of speech does not mean a blanket permission to say anything anybody thinks. It means balancing the inherent value of a given view with the obligation to ensure that other members of a given community can participate in discourse as fully recognized members of that community.”

That’s a vision that is increasingly being adopted on college campuses, and it’s leaking down to our primary and secondary levels of education. Baer apparently believes that the test for one’s commitment to free speech comes when he balances his views with those of others. His vision justifies the violent disruptions of speeches by Heather Mac Donald at Claremont McKenna College, Milo Yiannopoulos at UC Berkeley and Charles Murray at Middlebury College. Baer’s vision is totalitarian nonsense. The true test of one’s commitment to free speech comes when he permits people to be free to say and write those things he finds deeply offensive.

Americans who see themselves as either liberal or conservative should rise up against this totalitarian trend on America’s college campuses. I believe the most effective way to do so is to hit these campus tyrants where it hurts the most — in the pocketbook. Lawmakers should slash budgets, and donors should keep their money in their pockets. 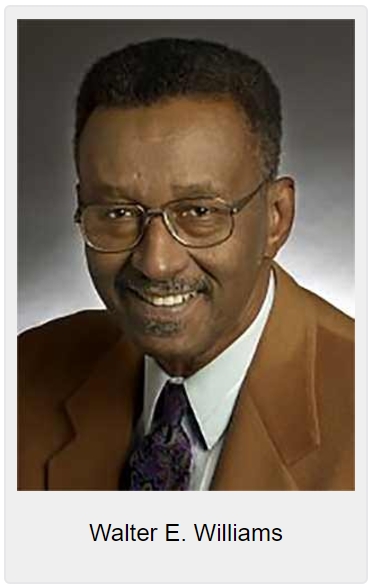 Walter E. Williams is a professor of economics at George Mason University. Williams is also the author of several books. Among these are The State Against Blacks, later made into a television documentary, America: A Minority Viewpoint, All It Takes Is Guts, South Africa’s War Against Capitalism, More Liberty Means Less Government, Liberty Versus The Tyranny of Socialism, and recently his autobiography, Up From The Projects.