Is Chris Wallace About To Bring A Half To CNN’s Reboot?

She Killed A Woman In The Street, What She Said Is Absolutely Bone Chilling….

Tayla Clement who dubs herself “The Girl Who Can’t Smile,” hopes to be a role model for those out there who feel judged based on their appearance.

The 24-year-old Clement who became suicidal after being bullied for being born with a rare condition that left her unable to move her mouth and eyes has signed a contract with a leading modeling agency.

The Paralympian and motivational speaker shared the news on Instagram. “I’m super excited to take my purpose of being the empowerment, inspiration, and change I needed when I was younger, to a whole new level,” she wrote.

Clement was born with a rare 1 in 4 million congenital incurable conditions called Moebius syndrome, which affects the muscles that control facial expression and eye movement.

Clement shared that growing up became very difficult for her, she was brutally bullied as a child.

“People would bring plastic bags to school and tell me to put them over my head because I was so ugly they didn’t want to see me, and I didn’t deserve to be seen. I think when you grow up being told that you’re ugly and you’re worthless you believe it because you don’t know anything else.” 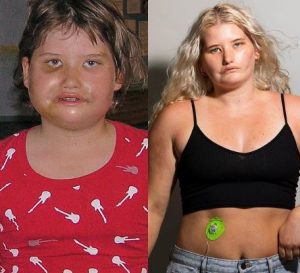 More details of this inspiring story from the ‘Who Knew News’ report:

Clement underwent surgery at the age of 12 to improve her smile by transferring tissue from her thigh to the corners of her lips. However, after a year of recovery, physicians were unable to rouse the nerves in her face, and nothing improved, she told 7 News in Australia. She thought the surgery would solve all her issues, but it didn’t.

Clement was bullied throughout her school years, and by the age of 17, she was having up to ten seizures a day, which physicians believed were dissociative seizures caused by extreme traumatic stress.

After graduating, Clement was able to build self-confidence, thanks in part to the gym and mediation. And now, as a model with Zebedee Talent, she’ll have the chance to inspire others.

Clement says it lights her up to be able to help and empower others. She also wishes to be a role model for others, something she lacked as a child.

She said she felt really worthless and not accepted because she didn’t see someone like her in the movies or magazines. Now, “to be so openly accepted and wanted, it just felt so amazing.”

She added, “It makes me kind of emotional, but I’m just so glad that it was me that went through everything, because I get to inspire people and help people — it just makes me so happy.”