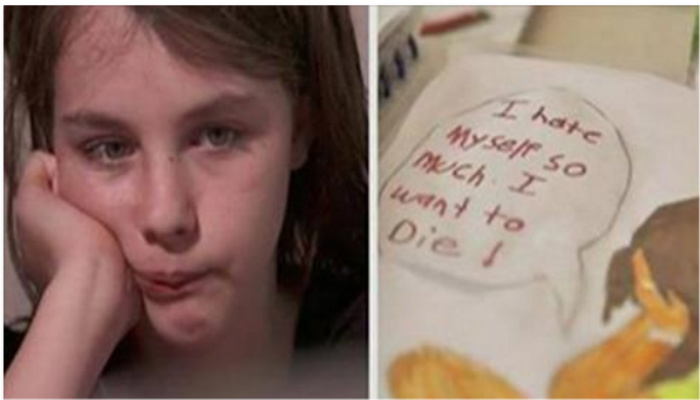 When the bullying got real bad, she stopped eating as she spiraled downward into depression.

“I wanted to die. I wanted to leave this world and never come back,” said Tayla, adding that kids beat her up, sexually harassed her, and encouraged her to jump off a cliff.

“It made me feel really terrible and like nobody really loved me anymore,” Tayla said in an SBS 2 documentary of the comments they’d make.

Instead of trying to protect the girl from the bullying that caused her to suffer so much, Tayla’s school principal in Australia blamed her.

“If Tayla’s going to do unusual things, she’s gonna get picked on,” Tayla’s mother, Kali Sekhmet, recalled the principal saying to her.

Instead, they simply placed her in an isolated safe room, making her feel even more alienated and ashamed.

“I didn’t like being isolated. I just wanted to play and have people leave me alone,” explained Tayla, adding it felt like a “prison.”

Tayla got so desperate, she resorted to seeking help via a Change.org petition titled “School bullying is killing me.”

“I only beg for you to please sign my petition to ask Dysart State High School to take a stronger stance against bullying and for the government to stop the school getting away with this,” she wrote on the petition, which went viral and captured international media attention in June.

But after the hype died down, things actually got worse for Tayla.

In response to her petition, the bullying intensified, leading Tayla to try killing herself.

When child services were finally forced to intervene, they found the bullying so severe, drastic measures were needed to protect Tayla.

She not only left the school, she moved out of town to live with her grandfather.

While she may be safer now, the family cannot forget what happened to her. Kali and Tayla continue to fight for others who are being bullied. “I would like to see better policies from the education minister about bullying,” said Kali. “They may be just kids but the tactics they’re using are seriously damaging.”

“Countries throughout the world have identified bullying as a leading adolescent health concern,” according to the study.
[youtube https://www.youtube.com/watch?v=MwBhpTe4D64]